The hairline of superstar American basketball player LeBron James has been the subject of intense media interest for the past few years, fuelled by what appears to be a changing hairline.

But despite suggestions that the 30-year-old Cleveland Cavaliers ace has had a hair transplant and that he uses a variety of products to try and mask what appears in some photographs as quite clear signs of hair loss, his personal hairdresser Nick Castemanos said this week that the player’s hair is “all his”. 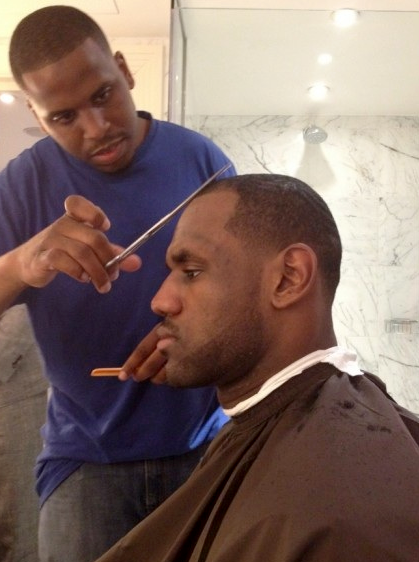 According to Yahoo Sports, Castemanos has grown tired of being repeatedly asked about his most famous client’s hair, and wanted to set the record straight.

“There’s no dye. No additives. No preservatives,” said Castemanos. “Everyone thinks he’s dyeing his hair using Bigen or Black Ice. It’s all his hair.”

Bigen is a powder dye marketed at black men that gives long-lasting, deeply pigmented coverage it makes beards look darker and more defined, whilst it can also make hair appear thicker and restored. A downside is that it can also give hair and beards something of a “drawn on” appearance.

In trying to clear up speculation about the player’s hair loss, however, Castemanos seems only to have raised more questions. Not only did he fail to categorically quash rumours that the player had had a hair transplant, he also said that when cutting his hair he leaves LeBron “less bald.”

No one is quite sure what this means!


LeBron’s hair has been on the receiving end of as much attention in the US as Wayne Rooney’s has in the UK. The media was especially quick to notice how even an NBA video game series had picked up on the player’s seemingly ever-changing hairline, with the 2015 version of the game getting rid of the receding hairline that was seen in the 2014 edition.

Part of the media interest comes from the fact that LeBron is one of America’s most famous and best-paid athletes. Whilst relatively unknown in the UK, at home he is a national hero, having helped the country to basketball gold medals at both the 2008 and 2012 Olympics.

Additional interest comes from the fact that the player was in his 20s when he first showed signs of a receding hairline. In fact, however, this is actually a very common age for signs of Male Pattern Baldness to first present themselves.

One explanation for the player’s fuller head of hair, as seen since the tail-end of last year, would be a successful hair loss treatment programme. Rapid  regrowth results are not uncommon, with some people of all hair types seeing impressive regrowth in just a few months.