Actress Karen Gillan Wore Wig Made From Her Own Hair

Elizabeth Yianni-Georgiou, lead hair and makeup designer on the Oscar-nominated superhero blockbuster, Guardians of the Galaxy, has revealed how she shaved Karen Gillan's head then made the actress lace front wigs from her own hair. 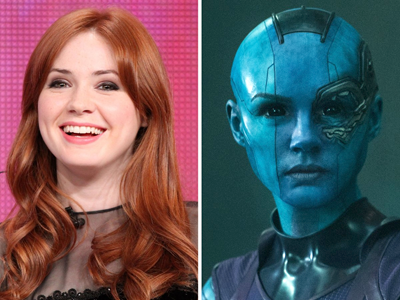 Former Doctor Who assistant, Karen Gillan had to shave her head for the Marvel comics action role so that the prosthetics required to play her half-alien, half-robot character, Nebula, would fit. Elizabeth told the New York Times about the “horrible task” of shaving the actress' signature red hair and explained her solution for post-filming movie promotion.

“Karen was a good sport and we made wigs from her hair so that she could wear them to interviews. That was my idea. I just thought if a young actress has to go out for auditions, you can’t send her off with nothing, you’ve got to give her something beautiful.”

Recalling the day it happened, the 27 year old actress told Metro, "The day they cut my hair off, everyone was creeping around, being extra complimentary, because they had all been briefed they might have a sobbing actress on their hands... I fell asleep in my chair and woke up two hours later with no hair. It was hilarious".

Gillan noted how her drastic hair makeover caused people to treat her differently: "I think people were pretty intimidated by me. I really... I kind of liked it while I was playing the role".

Although she found having her head shaved an "interesting social experiment", Karen was delighted with her wig, marvelling "each strand was put into lace - it's amazing - they didn't want to leave me bald and unable to work". She also had some fun with it, admitting to enjoying whipping her wig off half-way through meetings and events, as with her appearance at ComicCon, saying, "It's fun to see people's reactions." 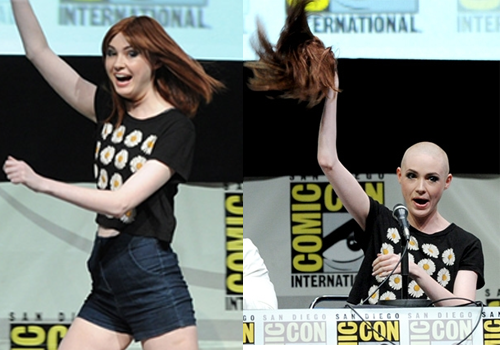 Luckily for Karen her buzz cut was a cosmetic career decision and not the result of dealing with a hair loss condition. However, it is interesting that she still needed to conceal her hair in order to get work, such is the importance placed on the appearance of thick, healthy hair by the media.

For women with hair loss, there are a number of ways to cope with their shedding, including seeking professional hair loss treatment although some do prefer to conceal their thinning hair.

Wearing a wig is one way to disguise shedding, but this can also cause further hair loss problems as regularly wearing tightly-affixed weaves and hair extensions can lead to Traction Alopecia (TA). This causes excessive tension on the hair follicles, damaging them to the point where hair growth is slowed down or even stopped completely. Traction Alopecia often manifests as hair loss around the hairline, particularly at the temples and can also cause patchy hair loss in areas where the attachments have been placed. Treatment for Traction Alopecia is available and features minoxidil which, although medically-proven for female pattern hair loss regrowth, has also produced significant results in many Belgravia clients with TA. 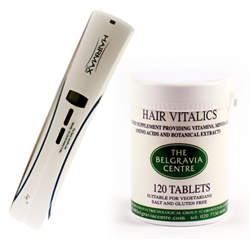 An alternative solution is to seek expert help at the first signs of hair loss, so that you can receive a thorough examination, diagnosis and personalised treatment recommendations. Then, speak openly with your hairdresser about how best to cut and style your hair in order to get the most flattering look whilst you wait for regrowth. This will usually start to become visible around 4-6 months after starting treatment.

With Nebula set to make a return in the sequel, Guardians of the Galaxy 2, due for release in May 2017, we recommend Gillan look into hair growth boosters and consider using high strength minoxidil to help spur on quicker regrowth following her next head shave.