Older Women Using Extensions to Combat Thinning Hair – But at What Cost?

A former fashion model who once featured on the cover of American Vogue has revealed how she has “fought back” at the hair loss that she has endured since entering her 60s and 70s.

Sandra Howard who is married to former Conservative party leader Michael Howard was known as Sandra Paul back in the swinging Sixties when she was a contemporary of Jean Shrimpton and Twiggy. Even then, she says, her hair was on the thin side, and she would often use clip-on wigs for photo-shoots. 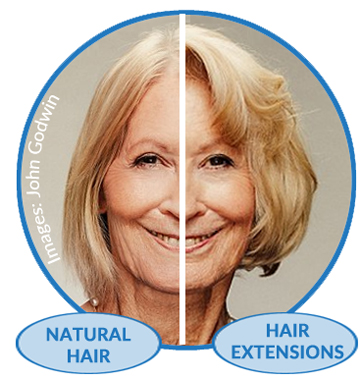 Thinning hair and the quest for volume

As her hair thinned even more during the past few decades, Mrs Howard writing in the Daily Mail says she has felt increasingly envious of women with fuller heads of hair. The solution she eventually settled on was a product known as Medi Connections a collection of very small hair extensions glued to existing hair to give it more volume.

In the article she wonders if a similar technique may be behind Great British Bake Off star Mary Berry’s more bouffant new look. Previous photos of the 81-year-old super-cook showed her with hair that appears thinner than the style she has sported during the latest series of the hit TV show.

Media reports suggest a number of older women are now using similar techniques and to try and disguise thinning hair.

"As women age, and particularly after they hit menopause, their hair naturally becomes thinner. This can happen regardless of whether they also have a hair loss condition or not as it is caused by a natural decrease in collagen production. This is also responsible for visible signs of ageing," explains senior Belgravia hair loss specialist, Leonora Doclis. "Thanks to advances in skincare technology and the popularisation of anti-ageing procedures, they may be able to stave off wrinkles and keep their skin looking more youthful than previous generations. So it follows that they would want their hair to look good and have that youthful volume too."

"Also, many women tend to cut their hair shorter as they get older and can find they miss the length they had when they were younger. When the hair becomes naturally thinner through age or due to a combination of ageing and a condition like Female Pattern Hair Loss - which is incredibly common in women over 40 - it can have a real effect on women's self-esteem. We see many women who, in addition to wanting to stop their shedding, also want to increase their hair's density in order to feel better about themselves."

Belgravia's female pattern hair loss treatment courses are personalised to each client and feature clinically-proven elements alongside specially selected hair growth boosters. This approach can be taken for clients up to the age of 70. However, if hair extensions or hairpieces are regularly relied upon to provide a volume boost to thinning hair, treatment for another hair loss condition could be in order. 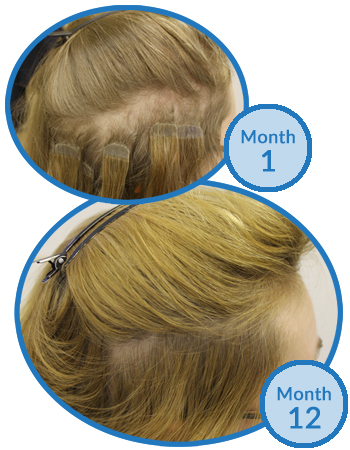 Hairdressers working with, and women wearing hair extensions have to be very careful as they can cause something called Traction Alopecia. This is a fully preventable hair loss condition which involves the follicles becoming damaged, usually by the frequent wearing of tight and/or heavy hairstyles, including extensions and hairpieces. Following these styling techniques on a regular basis is inadvisable at any age but this is even more true in older women whose hair is thinning due to age.

These styles place excessive strain on the follicles which in turn become stretched, weakening hair and in severe cases can even cause permanent baldness. This type of hair loss is mostly noticeable at the site of the tension - where the extensions are affixed, for example - and around the hairline which can recede under the strain. It is a common misconception that Traction Alopecia only affects women with afro hair. Afro hair is naturally more brittle so tends to break more easily so although it is most often seen in black women, European hair can be just as easily affected, especially thanks to the rise in popularity of tight braids and hair extensions. Luckily, in many cases traction alopecia treatment can rectify the problem as long as the follicles are also allowed time to recover and the hair is worn loosely.

In Mrs Howard’s case, it would seem that every care was taken to ensure that each of the 60 extensions was not only very small and light, but that it was meticulously placed so as not to place stress on her scalp though Mrs Howard did write that one of the extensions was “uncomfortably tight and tugged on my scalp.” She says the tightness soon eased, however.

Mrs Howard also highlighted another potential problem with hair extensions, writing that: “I have slipped up a couple of times and, instead of a soft-bristled brush, used a comb a definite no-no as it could yank out the extensions and my natural hair if it gets stuck in the bonds.”

A no-obligation consultation at a specialist hair loss clinic will provide women with a diagnosis so that they can then consider the various options open to them.

Is There An Upper Age Limit For Treating Female Hair Loss?'

Is There An Upper Age Limit For Treating Female Hair Loss?'

Study: Signs Of Menopause, Including Hair Loss, May Last Years

Study: Signs Of Menopause, Including Hair Loss, May Last Years