Ballerina Has Hair Transplant to Correct Hair Loss from Hairstyle

There is an accepted “look” in classical ballet that frequently involves performers pulling back their hair into a tight bun. But the havoc this can wreak over many years is well-documented, and it can lead to a hair loss condition that is colloquially known as Ballerina Baldness.

In fact, the condition’s correct name is Traction Alopecia, and it is just as often seen on people with tight braids or heavy hair extensions as it is on ballet dancers. Compared to genetic conditions such as Male Pattern Baldness or Female Pattern Hair Loss, the cause is actually very easy to comprehend: hair has been pulled back so tightly that it has placed such extreme stress on certain hair follicles that they become damaged (sometimes irreparably) and hair falls out. 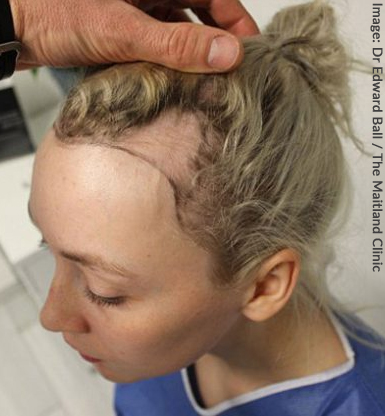 Decade of tying hair back

Around a decade of tying her hair back for ballet lessons led to a then-teenage girl from Epsom named Diva Hollands losing a large percentage of the hair along her hairline. Talking to the Daily Mail earlier this month, Ms Hollands, now 22, says that her mum had been tying her hair tightly back for ballet since Diva was just three.

By her teens she had visible balding at the front of her head where her hairline had started to recede due to the constant strain placed on it by her hairstyle. When a boy at school said she had “a forehead the size of a football pitch” it became a defining moment of her life, she says.

As a result, she would do everything she could to style her hair in such a way as to conceal her thinning edges. Her widow's peak - a receding hairline that forms a V or M shape - eventually became incredibly advanced.

A bespoke Traction Alopecia treatment course will often correct the damage, even in ballerinas, so long as they are 16 years old or over and are able to keep their hair down between performances and rehearsals. Allowing the follicles time to recover and rest is a crucial part of the healing and hair growth process. In severe, long-term cases where the hairloss has built up over time and the follicles have not been allowed to rest, then hair loss can be permanent. This was the case for Diva.

In these instances, surgery (a hair transplant) is the only solution  although whether or not a candidate is suitable or not is decided very much on a case-by-case basis. Deciding factors include the quality of donor hair available and the size of the area to be covered.

Surgery is generally only considered when advanced Traction Alopecia causes the hair follicles to be destroyed. They then scar over leaving the scalp with the shiny, smooth appearance of true baldness. Once this happens pharmaceutical hair loss treatments (such as high strength Minoxidil) can no longer stimulate the follicle as they have nothing to work with.

Luckily for Ms Hollands she was given the go ahead and has no regrets about the surgery, which took around eight hours. “When I saw the results I was absolutely gobsmacked,” she told the Daily Mail. “After only a few months I could see my hairline start to grow back. Every month it just got better. I couldn't be happier with how it looks.”

For those worried about hair loss from tight hairstyles or hair extensions it is often comforting, if nothing else, to have a professional assessment. A hair loss specialist will be able to provide a diagnosis, advice and treatment recommendations where needed, as well as information on how to prevent traction alopecia in the first place.