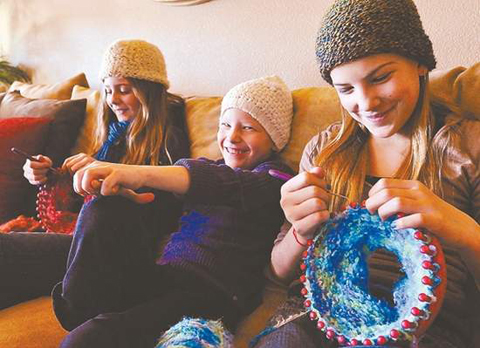 affects many people when they are very young, and when children start losing their hair it’s only natural that their friends and family will rally round to help and support them.

But when five year old Ava Johnson began losing her hair at the age of three, her older sister Caitlin, who is twelve, went the extra mile to do everything she could to help. With a friend, she began knitting hats and scarves, at first to help keep Ava warm. As she and her best friend Megan continued knitting however, they came upon the idea of not just donating them to other children suffering from Alopecia, but also using them to help raise awareness and funds for the condition.

The pair from California decided to set up a foundation, which they named ‘A Stitch of Hope’ and, with the help of Caitlin’s parents, built a website.

‘A Stitch of Hope’

Since a local newspaper ran a story on what the girls were doing, their website has received increased interest from Alopecia sufferers and people wanting to help. They now plan to have an online store up and running on the site through which they will sell the hats and scarves they make, as well as a donation point, with proceeds going to children's hair loss charities.

In a mission statement on the website, they say: “Our goal at A Stitch of Hope is to both raise awareness about Alopecia and to raise money for various organisations who are doing wonderful things with research and education. We also want to make funds available for alternative treatments which have had great success but are very costly.” They go on to say that they will “make these hats available at no charge to children in need of a warm hat.”

Caitlin’s sister Ava’s struggle with Alopecia began when the family noticed roughly circular bald patches occurring on her scalp. After being told it was Alopecia Areata they had hoped that it would soon grow back naturally, but this has not occurred as yet.

The exact causes of Alopecia Areata remain unknown, but it is widely thought that it is caused by a dysfunction of the body’s autoimmune system which causes it to attack healthy hair follicles. Hair loss is patchy to begin with, but can progress to the loss of all hair on the scalp, as in Ava’s case. This is known as Alopecia Totalis, which can extend even further to include the loss of all hair on the body including eyelashes and eyebrows, at which point it is known as Alopecia Universalis. Hair re-growth can eventually occur, but for some the condition can remain for long periods, or permanently.