Losing your hair as an adult can be traumatic but hair loss in children can be doubly troubling as kids find that they suddenly have to contend with people staring at them and feeling different in the playground.

But a five-year-old bald girl with Alopecia has been given a powerful confidence boost by winning a modelling contest, and being described by the organiser of the competition as “beautiful, with or without hair.”

Sydney Caraher, entered the competition at a shopping centre near her home in Wirral, Merseyside, and was thrilled when she won the first prize of a modelling contract with the north-west-based Frame agency. 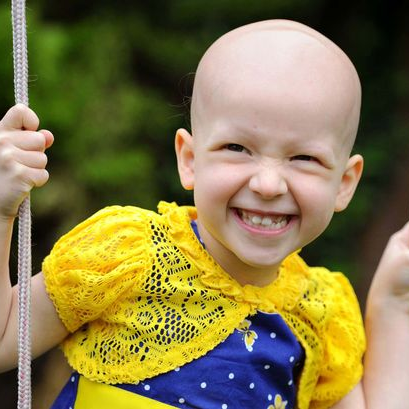 According to the BBC, Sydney first suffered hair loss at the age of two, from a condition thought to have been brought on by the shock and stress which followed a hospital visit to remove a piece of pen that had become stuck in her nostril.

Her hair initially fell out in clumps but later grew back, which suggests that she had been suffering from Alopecia Areata. This occurs when sudden or extreme stress causes the hair follicles to temporarily shut down the growth cycle, and presents itself as patchy hair loss which can appear anywhere on the scalp.

Alopecia Areata is an autoimmune condition which can be brought on by shock, among other things. Hair lost this way may regrow naturally, although if or when this will happen is impossible to predict, and alopecia may recur even following regrowth.

When Sydney was three, she lost her eyebrows and eyelashes, apparently her body’s response to the anxiety of being separated from her dummy. This is a condition known as Alopecia Totalis which extends further than Alopecia Areata, causing complete hair loss from the head, including eyelashes, eyebrows and facial hair such as nose hair.

Although there are treatments for Alopecia Areata that have proved effective in the mild-to-moderate stages of the condition, there are currently limited options for Alopecia Totalis treatment. Also, those that are available - such as topical immunotherapy - do not tend to have significant success rates.

More shedding followed a year later after an operation to improve her hearing. Her mother told the BBC that, “Brushing her hair was like something out of a film it was coming out in handfuls and when she woke up in the morning, it would be all over her pillow.”

Many people, say her parents, wrongly assumed she had cancer and had lost her hair as a result of treatment. While Sydney initially tried to accept the hair loss, telling people she was a boy now, she had a change of heart after seeing the Disney film Frozen. “She quickly changed her mind and wanted to be a princess again,” said her mother.

Praising the hair loss charity Alopecia UK for their continued support, Sydney's mother added that winning the modelling deal has been a great boost to the five-year-old’s confidence.