Losing all of the hair on your head and body to the rare autoimmune condition Alopecia Universalis is undeniably life-changing, but as four women with the condition recently agreed, it isn’t the end of the world. 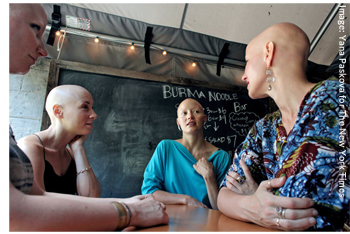 In an article written in the New York Times by novelist Helen Phillips, who has Alopecia Universalis herself, she describes a recent lunch date (pictured) which she had with three other New York women who have the same cause of hair loss.

“Though I have never met my three doppelgängers,” she writes, “I know them, in a way.” Ever since 2011, she explains, when after 18 years of baldness she stopped wearing scarves to conceal her condition, strangers have been greeting her warmly, having confused her with someone else. For the article, she met up with three of the most likely candidates to talk about their hair loss.

Costume supervisor Megan Sanders was first mistaken for fashion designer-turned-filmmaker Rachel Fleit three years ago when on her way to a meeting in Manhattan’s Chelsea district. Megan already knew of Rachel from previous cases of mistaken identity. The fourth member of the group, branding specialist Brittany Myers, lost her hair when she was 25. 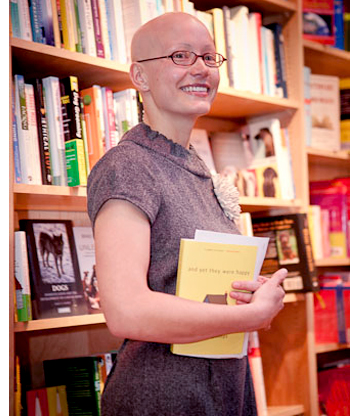 Don't call it a 'disease'

Helen, pictured right, writes that the meeting brought up a number of interesting points, including a deep appreciation for living in New York city, where a bald woman is “rarely the oddest thing anyone has ever seen on a given day”. They also share a reticence to call Alopecia Universalis - the most severe form of Alopecia Areata - a “disease”. “Disease feels like too strong a term for a problem that is not life (or even health-) threatening,” writes Helen.

The article also highlights how difficult it has been for the four to come to terms with their hair loss “situation” as Rachel jokingly calls it. 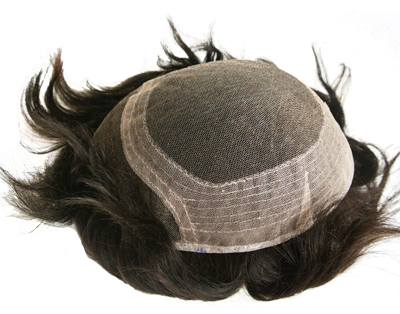 Helen and Rachel, who both lost their hair through childhood alopecia, admit to heightened self-consciousness whenever they are around youngsters, memories of trying to keep their hair loss from their classmates difficult to erase. Rachel explains that she even slept in her wig the entire time she was a freshman at college because she didn’t want to tell her roommate the truth.

Brittany, meanwhile, recalls the evening she had forgotten to put her bandana into her gym bag: “I just couldn’t do it (go out into the gym). I just had a nervous breakdown in the changing room.”

As there is currently no truly effective treatment for Alopecia Universalis, all four women have come to embrace their hair loss as part of who they are. As Helen says: “We have discovered that it is possible for one’s hairlessness to go from feeling like a threat to one’s identity to feeling like an essential part of one’s identity.”