Such was the case for a young Australian named Sarah Christian when all of her hair fell out when she was nine or 10. Now, two decades later, she is putting everything she has ever learned about Alopecia Areata to good use. 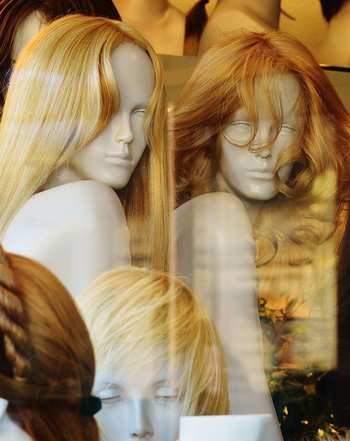 Like many children with Alopecia Areata, Sarah, from Sydney, was bullied when she was at school. Other pupils would pull off her wig, and when she was in her teens she found it especially hard to feel equal to the other girls at school with their beautiful hair.

Over the years, Sarah unwittingly became something of an expert on wigs presumably because her hair loss was so severe that treatment was unsuccessful. Today, many cases of Alopecia Areata in its patchy, scalp-only form, can be treated with a tailored alopecia areata treatment course. More extreme forms of the condition Alopecia Totalis and Alopecia Universalis however, lead to total baldness that currently cannot be treated effectively.

In an article in the Daily Mail written to highlight Australia’s National Alopecia Awareness Week from 13th-19th November Sarah explains how she has spent half her life battling in vain to find a cure that works for her. And she has devoted almost as much time to finding a wig that fits and looks realistic.

Her solution was to start importing wigs and hair from Europe and open up her own salon, which she has named The Beautiful Hair Boutique. Today, she sells wigs, hairpieces, hair extensions and hair toppers (designed to fill in sparse hair) by appointment and is a mine of information to her anxious customers who have also lost their hair.

“A lot of the time I’m more of a counsellor and the wig is just secondary,” she tells the Mail. “Women will come in and cry and just want to talk to someone who understands hair loss, because with Alopecia or cancer it’s the number one thing women fear. Lending a listening ear or a shoulder to cry on is the least I can do to help.”

If you, too, are worried about hair loss, Belgravia offers help and professional advice on all kinds of treatable conditions, including Alopecia Areata, Male Pattern Baldness and Female Pattern Hair Loss, Telogen Effluvium which is frequently stress-induced and Traction Alopecia, the hair loss condition that is usually caused by excessively tight hair styles.