Is your husband experiencing hair loss? You might not think it's a big deal after all, around 30% of 30-year-old men are affected by male pattern baldness, and this figure rises to around 50% of men in their 50s. Yet hair loss can place a strain on your relationship; not necessarily because of balding itself, but because of the effect it can have on a man’s self-confidence.

Sasha Brown-Worsham's husband started to notice hair loss in his 20s, and it really bothered him. Sasha had no idea how much baldness would come to affect her husband’s confidence. She knew that hair loss was a major concern for many men but she didn't find her husband any less attractive for his lack of hair. In fact, she found him more physically attractive than many men she had dated who sported a full head of hair. He had a lot going for him 6ft 2”, handsome and in good shape. Nevertheless, his constant worries and complaints about his hair loss and his lack of confidence began to affect their relationship.

She explains, "I had no idea how much it really bothered (some) men and how much it would come to bother me. For my husband, it was a sore point. I could have told him he gained weight, that he had food stuck in his teeth, or that he was dressed badly, but if I knocked his hair (or lack thereof), all bets were off".

Sasha's husband tried to grow his thinning hair, covering his bald patches with obvious comb-overs and refusing to listen to his wife's pleas to shave his head and embrace his hair loss. He complained it made him look 10 years older (at this point he was 30) and became self-conscious, spending too much money on shampoos and over-the-counter hair loss products that promised regrowth, none of which helped.

Then one day, he changed. He decided to embrace his baldness and shaved his head. A promotion at work quickly followed, into a leadership position normally occupied by men in their 40s (he was 33). He stopped worrying about his hair, took pride in his appearance and felt great and so did Sasha!

Sasha was never bothered by her husband's hair loss per se she still found him as attractive as ever, but his lack of confidence and attitude towards his balding pate made her feel negative about it too. Today, at 37, her husband looks better and feels more confident than ever before. 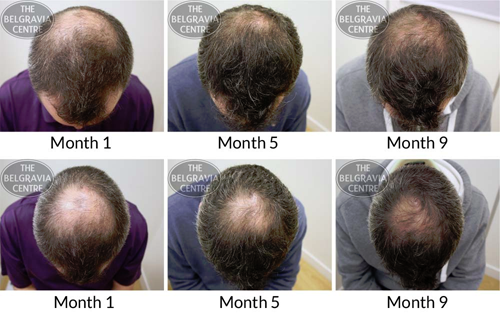 If you're experiencing male pattern hair loss and don't feel ready to embrace your balding just yet, speak to a specialist about a bespoke hair loss treatment programme. Many men who come to The Belgravia Centre to help reverse their signs of hereditary hair loss tell us how astonished they are with their results and what a boost this gives to their self-esteem.

Hundreds of case studies are pictured in our Hair Loss Treatment Success Stories which provide the client's feedback and review of their treatment experience alongside the images charting their regrowth progress. One example is Scott, pictured right, who said of his Belgravia treatment results, "...Having just completed my first year with Belgravia, I am delighted with the progress made so far.  Not only has my hair improved but so has my confidence...". Click Scott's photos to view his full Success Story.