In the interests of bravado, many balding men will tell you that they’re perfectly fine with their hair loss and that if it works for Jason Statham and Bruce Willis, why not them?

But the truth is often far more painful and many men who are thinning on top often wonder if their wife or girlfriend thinks the less of them. 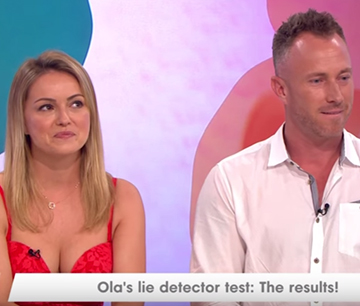 Fortunately for most men, this is a conversation that can be had in private though not for former Strictly Come Dancing star James Jordan, whose wife, Ola, was given this question to ponder while wired up to a lie detector on the top daytime TV show, Loose Women.


His fellow former Strictly star wife was being grilled about everything from jealousy to pranging their car on the popular daytime TV show when the panel threw in a question that James, who was faithfully sitting beside his wife as the results of the test were read out, wasn’t expecting.

“Does it bother you that James is losing his hair?” the Loose Women team had asked Ola. James insisted that he hadn't chosen this question to be asked, and jokingly said, "I didn't know I was!"

Luckily, Ola answered “no”, his receding hairline wasn’t an issue for her. The polygraph readings confirmed she was telling the truth.

Many men who are losing hair to male pattern hair loss may not know that they do actually have tools available to them that can stop this hereditary hair thinning and, in many cases, help new hairs to grow back. The two MHRA licensed and FDA approved treatments can be used together or separately. These are designed to minimise the testosterone by-product responsible for causing baldness - DHT - and encourage regrowth.

The hair follicles around the temples areas are thought to be the most sensitive to DHT. As this hormone binds to the follicles around the top of the scalp in men predisposed to genetic hairloss, it gradually weakens them. This, in turn, leads to thinning hair and the hairline receding, often causing a widow's peak as can be seen on James Jordan. 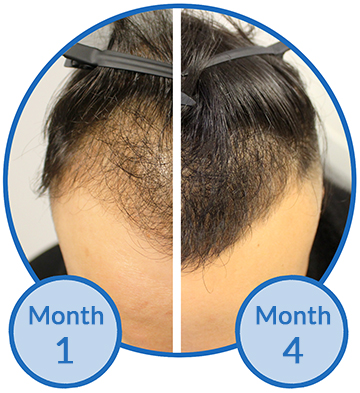 
When it comes to treating a receding hairline, or other similarly stubborn areas, such as the crown, topical applications of high strength minoxidil can be extremely useful. Typically male hair loss treatment courses will contain this and/or the DHT-blocking daily tablet, finasteride 1mg.

Supplementary non-medicinal hair growth boosters, may also be used alongside these recognised treatments.

Bothered by his receding hairline


James Jordan’s confession that he is bothered by his hair loss is far from surprising. Many men associate thinning edges and other signs of male pattern baldness with the ageing process, though it can actually start to present any time following puberty. While some men certainly suit the shaven-headed look which can be a simple way to divert the gaze from areas of thinning hair that would appear obvious on longer hair others hate the style. It is common to hear from men that they feel that their head shape is not suited to a buzz-cut - a reason Elton John gave for addressing his own MPB.

A skilled hairdresser should have some alternative tricks up his sleeve the classic ‘Caesar’ cut has been hailed as the single best haircut for a man with thinning hair. There are even forms of scalp 'makeup' to help conceal hair loss on a temporary basis. Cosmetic concealer powders can temporarily give existing hairs a thicker appearance, while scalp colourants can also help the skin to seem less visible. Often unless it rains.

Hair Loss treatment can be undertaken privately, without fanfare, and results become noticeable gradually. By inhibiting DHT and stimulating regrowth in line with the natural hair growth cycle, it tends to take from three to six months of consistent use for changes - from stabilisation of shedding to new hairs - to appear. For those with more advanced hair loss, it may take longer, though a specialist should be able to explain the most likely prognosis during a consultation, though each individual's rate of shedding varies.

My Hairline is Receding But My Hair is Very Thick'

My Hairline is Receding But My Hair is Very Thick'