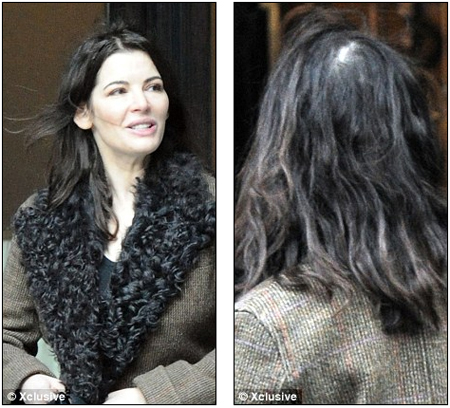 Over the course of the past few years, self-styled “domestic goddess” Nigella Lawson has hit the headlines showing signs of apparent hair loss. Back in 2011, questions were raised about Nigella’s weight loss regime and the effect her diet may be having on the health of her hair and scalp. However, recent allegations by Nigella’s ex-husband Charles Saatchi raise the possibility of another cause of the apparent bald patch developing at the back of her head.

As part of an unrelated court case, an email from Saatchi was read out, which accused Nigella of being “off [her] head on drugs” and having a serious substance abuse problem for over a decade. The celebrity chef’s ex-husband went on allege that she used cocaine, unauthorised prescription drugs and class-B drugs on a regular basis.

Cocaine is not known to have a direct effect on hair growth or loss, but the drug has been shown to significantly alter the eating habits of users. Cocaine is known to suppress the appetite for instance, so users tend to eat less. In doing so, cocaine users may fail to get all the vitamins and minerals required for healthy hair growth, occasionally leading to the development of a hair loss condition known as diffuse thinning, which can often be corrected over time simply by re-establishing a healthy diet and eating patterns.

The stimulating effects of cocaine can cause the human body to overreact and trigger a shock reaction. A form of hair loss that can be caused by a sudden shock to the system is Telogen Effluvium which can result in the development of bald patches.

However, this condition certainly cannot be directly attributed to any drug use, as it can also be triggered by emotional stress. In the case of Nigella Lawson, her well-publicised split with Saatchi earlier this year after he was photographed holding her by the throat, could certainly be stressful enough to have triggered this sort of hair loss condition.

Telogen Effluvium is an unusual condition in that hair loss first becomes noticeable many months after the incident which triggered the shock reaction. Hair loss caused by Telogen Effluvium is often dramatic, but tends to correct itself naturally over time.

On balance, it seems that the most likely explanation for Nigella’s hair loss is Female Pattern Baldness, the most common of all hair loss conditions. This condition is characterised by the development of thinning at the top of the head and is caused by a genetic predisposition but can be accelerated by stress, malnutrition or being run down.

Since Saatchi’s startling claims about his ex-wife, Nigella Lawson has been noticeably absent from the public eye. As such it is hard to ascertain whether her hair loss condition has improved or worsened over recent weeks.