The mother of a bald seven year old has revealed to MTV how her daughter, who lost her hair to alopecia areata, touched the heart of Walking Dead star Norman Reedus. 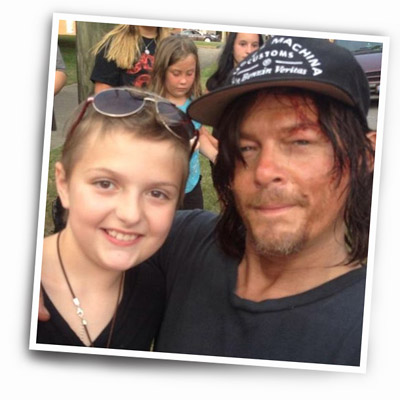 Actor and artist Reedus has no problems in the hair department - his thick, shaggy locks are a thing of beauty - yet he named his production company 'Big Bald Head'.

"It’s from a Laurie Anderson song, ‘Sharkey’s Day,’ “The suns coming up / like a big bald head.” It was my first concert," he explained to Lady Gunn magazine.

As any social-media savvy celebrity would, Reedus - who plays fan favourite, Daryl Dixon, in the hit TV show - adopted the moniker for his Twitter and Instagram channels, where it caught the eye of young Walking Dead fan, Ava Truesdale.

“She started losing her hair. Three months later, and her hair was completely gone,” Ava's mother Heather, explained. Talking about Reedus, she added that Ava, “thought it was so cool that his handle was ’bigbaldhead,’ because I was like, ‘you’re his little bald head!’." 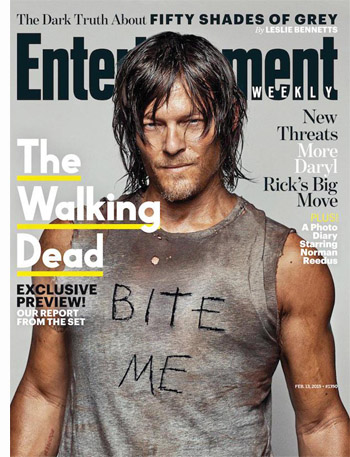 Daryl was clearly Ava's favourite character in the zombie series - which her parents pre-screened before letting her watch - as she liked that he was "a loyal friend". But it wasn't just on screen that friendships blossomed. Ava visited Reedus on set and at conventions across America a number of times, bringing gifts of drawings she had done for him and treats for his dog.

Each time the little 'badass' - who is also a second degree black belt - was welcomed by the star. She even went to show the 46 year old when her hair started to grow back and she was able to ditch her bandana.

“He was so sweet to her,” Heather beamed. “He called her ‘sweetie’ and ‘cutie,’ and he really liked her picture.” While these small actions may not sound like much, to a little girl whose hair loss made her look so different to all her friends, these kind words meant a lot.

“He’s very loyal, he’s smart, he makes me more confident, he makes me feel stronger,” Ava told MTV about her famous friend. “And he’s funny. And he gives the best hugs.”

Coping with hair loss in children

Dealing with hair loss can be hard at any age but childhood alopecia can be particularly traumatic given the visible nature of the condition. Although treatment for alopecia areata can produce significant regrowth results, it is often only suitable for those aged 16 and over.

Although this type of alopecia has no physical effects, aside from the obvious hair loss and sometimes changes to the nails, support is often needed to cope with the psychological ramifications. 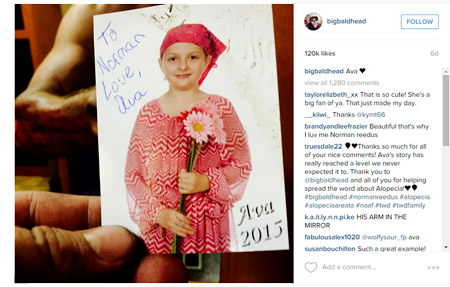 Ava's mum puts it well when she explains what she and her husband tell their daughter: "Even though you’re going through this, it’s just hair it’s not something that’s physically harming you. Even though this does suck, it’s just hair. We can fix that, and it’s not going to stop you from anything else.’”

Norman Reedus recently posted a photo Ava had given him to his Instagram account, giving the youngster another much-needed boost and raising awareness for Alopecia Areata in the process as it gathered over 120,000 'likes'.

“We don’t want her to be superficial, but it definitely does boost her confidence when she’s got one of the biggest stars in the world posting a picture of her with a heart next to her name,” Heather said.

Hair lost to Alopecia Areata will often grow back of its own accord, however, if or when this could happen is impossible to predict. Even if it does clear up, the condition may also recur so it is helpful for you and your child to be as educated as possible about the different eventualities.

For those in need of support - whether children struggling with hair loss, or family members trying to help them - a number of UK hair loss charities provide expert services free of charge. This ranges from information about Alopecia Areata and potential treatments, to details of local support groups, and even free real-hair wigs which can help boost a child's self-confidence during this difficult time.