Although it can cause hair loss, it is not classified as a hair loss condition; rather it is considered a psychiatric impulse control disorder. This presents as an obsessive compulsion whereby those affected repeatedly twist or pull out their own hair - scalp, facial or body hair. 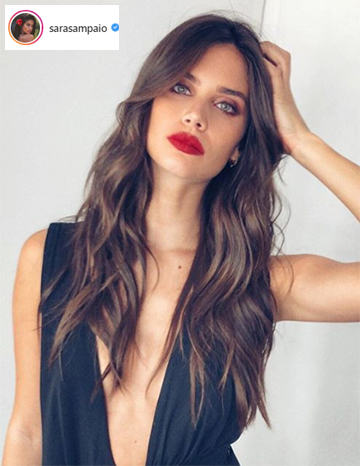 Worse when stressed or bored


Sampaio revealed she has been pulling out her eyelashes and eyebrows since she was 15 years old in a candid social media Q&A. The condition is more common among teenagers and young adults, particularly females.

The 27 year old explained that she is grateful to have a 'mild' form of Trichotillomania given she does not pull her scalp hair. Doing so can cause permanent bald patches in cases where the hair follicle becomes sufficiently damaged.

Although Sara Sampaio says she first started pulling out her eyelashes and moved on to her eyebrows, she now only pulls on her brows. "The episodes are worse under a lot of stress or when I'm not doing anything, like watching TV or reading a book," she told her followers in Stories that are saved to her Instagram.


The Portuguese model explained that she fills in her patchy brows with a pencil and takes the prescription drug NAC (N-acetylcysteine) to help control her pulling urges. She said that this has reduced her pulling a little but stressed that these were simply her experiences and anyone else also experiencing Trichotillomania should speak to their doctor before trying any form of medication.

People with Trichotillomania may benefit from psychotherapy, particularly Cognitive Behavioural Therapy (CBT). This can help them to identify their pull triggers - which can be unique to each individual though stress and boredom are often mentioned - and develop coping strategies to help them avoid pulling when they feel this compulsion. Samapaio says in another Instastory video that she visits a psychiatrist as part of her treatment.

Once a person is 'pull-free' the hair will generally regrow naturally, though any areas where the hair follicles have been damaged may take longer or, in severe cases, not grow back at all.

This condition, especially when the areas of hair being pulled are visible to others, can cause low self-esteem and shame, with those affected often keeping it a secret as far as possible. Sara Sampaio urges people not to do this, "I'm not ashame of it, it's a part of me... it's who I am! So if you have it don't be ashame to talk about it and don't be ashame[d] of it!" She also encouraged everyone to be more tolerant and less judgemental of people who were or looked 'different' as "Being understanding and kind goes a long way!"

NHS Needs to do More to Help Trichotillomania Sufferers

NHS Needs to do More to Help Trichotillomania Sufferers