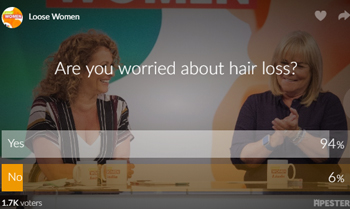 Polls can provide a fascinating snapshot of public opinion, and if a recent survey conducted by ITV show Loose Women is anything go by almost all British women are worried about hair loss.

While it might have been that the headline of the poll “Are you worried about hair loss?” naturally attracted participants who were indeed concerned about losing their locks, the results nonetheless paint an intriguing picture. Could it be that women are every bit as concerned about losing their hair as men but unless they can express their concerns behind the anonymity of an online poll, female hair loss remains a no-go area?

Ever since footballer Wayne Rooney opened up about the hair transplants he underwent to try and combat his Male Pattern Baldness, men have steadily been gaining confidence to talk about thinning hair a little more easily. But for women, hair loss remains a taboo. 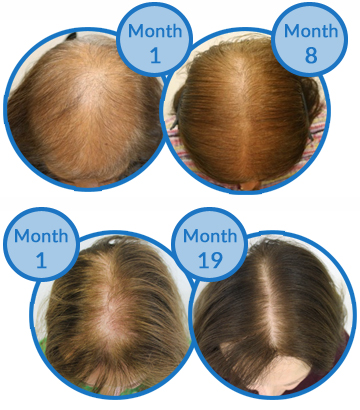 At the time of writing, almost 1,700 women had taken part in the Loose Women online poll and 94 per cent claimed that hair loss was a worry.

“Research suggests the number of British women suffering from hair loss and thinning hair is on the rise,” says the show's website. “In fact it's estimated hair loss affects an astonishing 8 million women in the UK. It can be very traumatic, with women talking of suffering embarrassment and low self esteem, and of feeling inferior and unfeminine.”

In some ways, when it comes to genetic hair loss, women have things slightly easier than men as their pattern of shedding is less clearly defined. Both only affect the top of the scalp but display in different ways. In cases of Male Pattern baldness, for example, a very visible receding hairline and thinning crown leaves people under no illusion that a man is losing his hair.

By comparison, when women are affected by androgenetic alopecia - better known as Female Pattern Hair Loss - this manifests itself as a more generalised, all-over thinning. While this can be noticeable, especially at the temples and the parting which may start to appear wider, in many women it can be quite subtle. Although the hair thinning can become extreme, female pattern hair loss does not tend to lead to baldness as it does with men. It can also be treated with a personalised female pattern hair loss treatment course to stabilise shedding and encourage healthy regrowth. 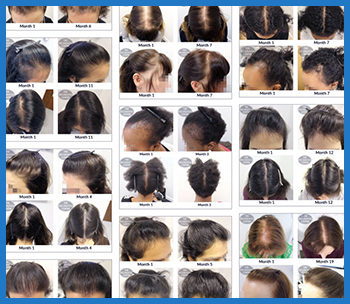 Where women get a worse deal than men is when they lose hair to a condition called Telogen Effluvium, something that rarely affects men as it can often be caused by hormonal issues relating to things such as pregnancy terminations and birth control pills. Other triggers include severe emotional stress and dietary imbalances commonly including iron deficiency.

Women are uniquely susceptible to a hair-shedding condition known as Postpartum Alopecia - which is a form of telogen effluvium and presents after having a baby. While the resulting hair thinning can be alarming it is simply the result of the body suddenly getting rid of the excess hair it had been “stockpiling” during pregnancy.

Finally, women are more likely to experience a condition named Traction Alopecia chiefly because they are more likely to have the kind of hairstyle that causes it. Traction Alopecia arises as a result of “tight” hairstyles that pull on the scalp, and common causes include braids and hair extensions. Whilst the first step to recovering from this hair loss condition is to stop wearing the offending hairstyles to allow the follicles to heal, a traction alopecia treatment course can then help to promote hair growth.

Any women concerned that their hair is perhaps less dense than before, or if they are starting to notice excessive shedding, thinning or even sudden hair loss, should seek professional help as soon as possible. A specialist will then be able to diagnose the condition - or conditions, given it is possible to have more than one simultaneously - and discuss recommended treatments in order to formulate a bespoke plan customised to the individual's precise needs. Belgravia has seen an ever-increasing number of women visiting our hair loss clinics in recent years. As celebrities such as Keira Knightley,