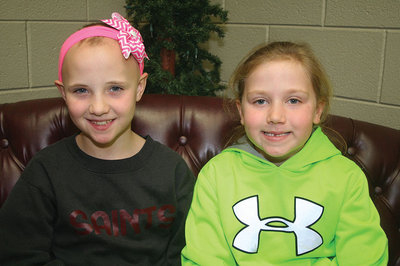 Twin sisters Mckenzie and McKenley Montgomery are 7 years old and from Odenville, Alabama. It’s obvious that they are twins as their faces are incredibly similar yet there is one difference between the two: McKenley has no hair.

Since she was 5, McKenley, who is in the first grade with her sister at Odenville Elementary School, has been fighting a condition called Alopecia Areata. The condition is thought to be an auto-immune disorder and it’s not known what causes it. Factors such as extreme stress or trauma are thought to be a major cause. Symptoms of the condition include initial hair thinning and patchy hair loss; left untreated it could lead to total hair loss. Celebrities who have helped to raise the awareness of the condition include Gail Porter, who experienced Alopecia after the breakup of her marriage.

The twin’s parents, Crystal and Grant Montgomery, divorced in difficult circumstances almost 2 years ago, and it was then that Mckenley’s hair loss began. Her mum, Crystal, commented: “Last year is when her hair got worse and we decided to go ahead and shave her head. Her whole attitude changed and she regained confidence when Mrs Lower, her kindergarten teacher last year, made a special day just for her at Odenville Elementary school and called it Alopecia Awareness Day.”

A show of support

The twins’ first grade teacher Tammi Campbell organised for special t-shirts to be made and for everyone to wear blue, representing Alopecia, whilst their kindergarten teacher Mrs Lowery wore a bald cap; the whole school got involved and showed their support for McKenley.

Since then, McKenley has been visiting a specialist dermatologist. Crystal explained: “She is now doing a treatment called squaric acid. It causes an allergic reaction to the hair follicles and makes them start working, causing hair to grow back.”

This bright little girl doesn’t let Alopecia stop her doing the things she loves. She takes part in ballet, tap and jazz with her sister as well as developing a passion for singing and playing basketball.

While some forms of hairloss, such as pattern baldness, are genetic, Alopecia Areata doesn’t necessarily run in families. As everyone’s body reacts differently to stress and trauma, some people may be affected whilst others may not, which could explain why McKenley has developed the condition whilst her sister remains unaffected.