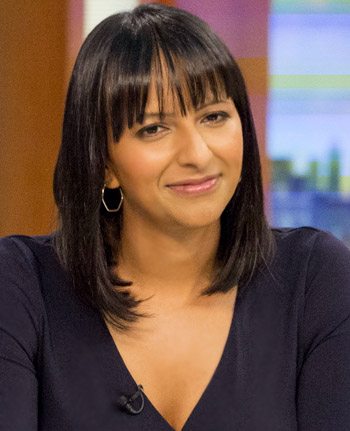 Triggered by shock and bereavement

As she interviewed a bride whose hair had fallen out just before her wedding day due to Alopecia Areata, the 38 year old TV presenter admitted she too has the same autoimmune condition. “I’ve had alopecia since I was about eight or nine," Singh told the newly-wed. "...my dad died …I know what caused it and it never, ever got better.”

Speaking to The Mirror, Ranvir Singh has now opened up about her hair loss, talking frankly about her experience ahead of Alopecia Awareness month which takes place in September.

Following her father's first heart attack, Ranvir's mum first noticed the rounded bald patches associated with Alopecia Areata while she plaited her daughter's hair for school.  "It was absolutely devastating," she recalls, "I’d have nightmares and wake up crying".

Just a year later, when Ranvir was nine years old, her father died from a second heart attack. "My world was completely ripped apart," she tells the newspaper, "And that’s when the hair loss went completely haywire. I’d wake up and my pillow would be covered in clumps".

After being officially diagnosed with Alopecia Areata - an autoimmune condition often triggered by sudden shock or trauma - Ranvir's family tried everything to help get her hair back. But, from a prescription shampoo to tablets from a Californian herbalist, nothing worked. Ranvir's older sister even arranged a course of light therapy to stimulate the 12 year old's hair growth by sitting under a heat lamp, which also proved sadly ineffective.

To make matters worse, as she started puberty Ranvir's hair started to become "really greasy" but her doctors advised her not to wash her hair very often. "All I wanted to do was tie it back but then you’d see all the bald patches. There was a lot teasing at school and I’d get called names like ‘Four finger forehead’ because my hairline had started to recede", she says.

Over the next three years she decided she didn't want to do anything about her hair loss, stopping light therapy and rejecting her mother's suggestion of a hair transplant. "I made a decision that looking pretty wasn’t my thing," she explains, "And probably in the long run that’s been a good thing. I just concentrated on other things. It’s very strange to end up in telly having felt that way. I appreciate the irony of it all".

In 2008 a breakthrough came when a friend invited Ranvir along to the opening of a new Trevor Sorbie hair salon in Manchester. Knowing the famous stylist has a charity which provides wigs and specialist hair styling for people with hair loss from chemotherapy, Ranvir approached him about her alopecia.

Sorbie sat her in a chair and brought over a stylist, instructing them to give her a fringe to hide her hair loss and cut her hair into a bob. "It was an absolute revelation," Ranvir says. "People thought it was a rather cool, kooky hairstyle little did they know the reason wasn’t out of fashion but was out of need".

The stylist also showed her how to use a dry shampoo-style hair powder, by New York brand Bumble and Bumble, to disguise her bald patches. "It’s like a spray paint... I use black and it fills in all the gaps," she confesses. Admitting, "I won’t go on TV without it. I won’t even leave the house without it. I’ve got this constant fear they’re going to stop this product line, so I try and bulk-buy it."

Despite their terrible reputation, Ranvir started wearing hair extensions in order to maintain her appearance whilst on TV. This was after experiencing post-partum hair loss, which caused her to have noticeably thinning hair in addition to the three bald patches of Alopecia Areata she has had since childhood. 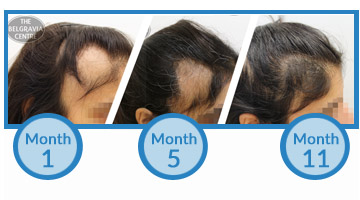 Alopecia Areata hair loss occurs when the follicles are prematurely forced into the resting phase of the hair growth cycle and remain there indefinitely. They lie dormant waiting for the signal to resume normal hair production but, as yet, there is no way of knowing if or when this sign will come.

Whilst for many the hair will grow back naturally within 12 months of the initial trigger incident, for others treatment for alopecia areata is the best way to promote regrowth. The condition can also recur once the hair has grown back.

At Belgravia we have seen many promising regrowth results from clients with this type of alopecia who follow treatment plans built around minoxidil which can help to stimulate the follicles. Anyone concerned that they are experiencing sudden hair fall should contact a hair loss specialist who will be able to provide advice and support in addressing the issue.

Belgravia Client Writes About Her Alopecia in The Telegraph

Belgravia Client Writes About Her Alopecia in The Telegraph