There have been a number of celebrities displaying clear signs of Male Pattern Baldness in candid paparazzi photos, only for them to sport a much fuller head of hair on camera, recently.

LeBron James, Wayne Rooney and David Beckham are among those who have been rumoured to use concealer products to disguise their hair loss.


Appearing on CNN's Face the Nation news show, Miller - a senior political advisor to and loyal supporter of Trump - was there to defend the Republicans' controversial Mexican border wall plans. For once, however, an alliance seemingly formed between Twitter users on both sides of the American political spectrum, not over the wall itself but the new hairline Stephen Miller sported whilst discussing it.

The 33 year old has had advanced frontal hair loss for some time now, which is why it was particularly puzzling for CNN viewers to see the dramatic reappearance of Miller's receding hairline. Not only did it come back, but it also looked significantly darker than the rest of his hair - the area around the back and sides which is unaffected by genetic hair loss - prompting speculation of the use of 'hair in a can' - a spray-on product which colours the scalp to give the illusion of thicker hair. 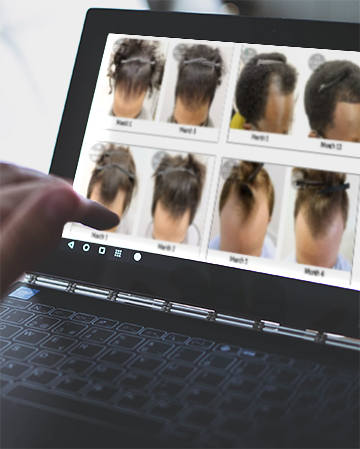 
Although products such as microscopic fibres, which cling to thinning hair to help bulk it out, can be effective in the short-term, they need existing hairs in order to work successfully. Where there are no hairs, or small vellus hairs, the effect can be patchy and obvious.

The 'hair in a can' aerosols can give the appearance of thicker hair and less visible scalp, but these are generally used on longer hair in order to avoid the 'sprayed-on' look of applying the paint-style product to a bare scalp.

There are two clinically-proven, MHRA-licensed and FDA-approved medications for treating Male Pattern Baldness - one topical and one oral. Topical applications of high strength minoxidil have been seen to be particularly useful when dealing with frontal hair loss, which can be a particularly stubborn area to treat. These pharmaceutical elements can also be used alongside appropriate hair growth supporting products - and even hair fibres, if desired.

If caught before the scalp takes on the smooth, shiny appearance of true baldness - where hair loss treatment becomes futile though hair transplant surgery may still be possible - there are non-invasive options which can be considered.

A consultation with a professional hair loss specialist should determine which approach is most suitable based on each individual's diagnosis, level and pattern of shedding, as well as their medical profile. Should Stephen Miller wish to investigate any of these avenues further, he could perhaps ask his boss for some recommendations...