With all the excitement regarding exploring the hair growth potential of JAK inhibitors, it can be easy to forget that there are plenty of other hair loss solutions being developed too.

One such product is currently known as FOL-005; it is a peptide-based liquid designed to stimulate hair growth and which its makers, Follicum AB, claim is based on 'natural amino acids'. 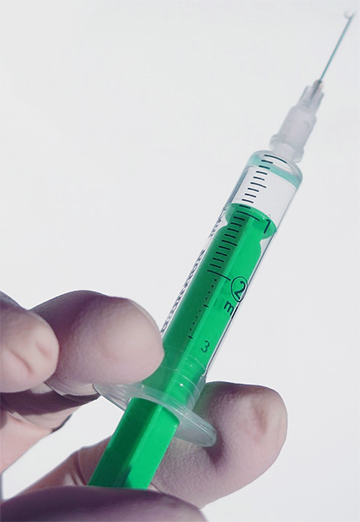 Having been in development since 2012, FOL-005 has been through many studies and changes already. First investigated in topical forms, injectable delivery systems have also been considered, though the company has now settled on trying to produce a "suitable topical formulation of our substance which is both attractive and easy to use for patients," according to the Follicum AB website.

On 31st October 2018 it was reported that the topline data from Phase IIa of the study into the injectable form of FOL-005 had been released, with an overview being posted to the company's website as a press release. Follicum claimed the results showed that, in the right doses, its product could '"awaken" dormant hair follicles'.

The results were seen after clinical trial participants were injected in the scalp three times per week, over an unspecified period of time, with FOL-005 in varying doses; a placebo was also administered to some volunteers as a control. The number of test subjects and whether they were men or women was not divulged.

Follicum AB reports of its findings: "In the study, hair growth increased on average by 7 hairs per cm2 and the increase was borderline statistically significant compared to baseline (p = 0.078)... A clear positive effect was also shown in the number of hairs in growth phase, another very important parameter for hair growth.

Which hair loss condition is it aimed at?

​​​​​Interestingly, we have seen no mention in any of the press releases or news articles that Follicum AB has made public regarding FOL-005 which state which hair loss conditions this product is meant to address. Nor is there information regarding whether the trial participants had any specific issues regarding, for example, genetic hair thinning - details which are crucial when assessing its potential scope of application. There is simply a passing mention of the formula being a "promising treatment for alopecia (hair loss)".

It is important to register, however, that only a small number of the treatments actually successfully make it through the research and development stage to the point where they become viable and clinically-proven options.

Currently, the medical regulatory bodies in both the UK and the USA - the MHRA and FDA respectively - have only licensed and approved two medications as hair loss treatments. These topical (high strength minoxidil, men and women) and oral (finasteride 1mg, men only) drugs are intended for treating androgenetic alopecia, more commonly referred to as Male Pattern Baldness and Female Pattern Hair Loss.

There are also a number of hair growth supporting devices which deliver low-level laser therapy (LLLT) to the scalp to help stimulate the follicles, which are FDA-cleared. The first of these to obtain such certification was the original HairMax LaserComb which has since been updated but still retains a patented combing action to help part the hair, allowing the LLLT to get straight to the scalp. This approach can be used alongside either or both of the established, sanctioned treatments mentioned previously.

For anyone concerned about thinning hair, sudden or excessive shedding, a consultation with a hair loss specialist can provide a professional diagnosis along with recommendations for appropriate treatments, based upon your medical profile and their findings. Regardless of how you decide to proceed, just finding out the precise problem and the options there are available to address it from an expert, can make this a comforting first step.