Toni Warne Highlights Alopecia Areata During Appearance on The Voice 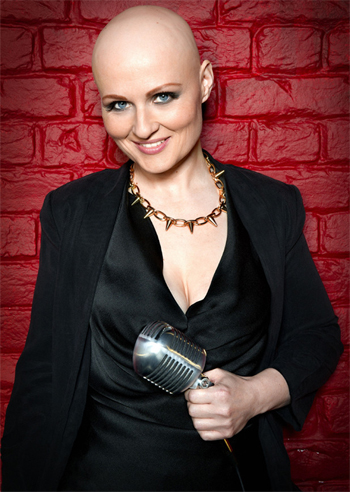 A recent appearance by singer Toni Warne on BBC One’s primetime music show The Voice has helped raise the profile of the hair loss condition Alopecia Areata. The Glasgow-based singer was chosen by judge Jessie J to continue through to the next round of the reality show.

Toni first tasted fame at the age of nine on the hit talent show Opportunity Knocks. However, Toni went on to lose much of her hair in her early twenties through Alopecia Areata, damaging her self-confidence to the point that she never managed to capitalise on her early success.

Toni said, “I suffered from Alopecia as young girl and in my 20s I lost all my hair completely. It had a big impact. I lost all of my confidence. I didn’t think I could [perform] the way that I am.”

Toni explains that taking part in a televised show after all these years was daunting, and admits experimenting with wigs to hide her hair loss. The fact that initial rounds of the competition are performed ‘blind’, with contestants being chosen purely on vocal ability whilst remaining invisible to the judges, managed to convince Toni that she should take part.

Toni Warne is one of an estimated 800,000 women in Scotland who experience some form of hair loss. These conditions are not limited to Alopecia Areata - they also include female pattern hair loss and Telogen Effluvium. However, the existence of any hair loss condition can often have an impact on a woman’s self-esteem.

The exact causes of Alopecia Areata are not fully understood, although many hair loss experts believe it to be an autoimmune disorder. Essentially the body’s immune system becomes ‘confused’, attacking its own hair follicles and causing the attached hair to fall out. As more hair follicles are shut down, bald patches develop which can, in some cases, result in total baldness of the scalp, head or whole body. Alopecia at this level of severity is known as Alopecia Totalis or Alopecia Universalis.

Alopecia Areata, despite being rarely talked about, is relatively common, affecting an estimated 600,000 men and women in the UK. Toni Warne’s appearance on The Voice is hoped to change this air of secrecy and alleviate any embarrassment felt by people with Alopecia Areata.

Can Alopecia Areata be treated?

The Belgravia Centre’s hair loss experts have successfully corrected patchy hair loss caused by mild to moderate Alopecia through the use of a personalised Alopecia Areata Treatment plan. Encouraging regrowth results have been seen in many Belgravia clients using high strength minoxidil as part of a bespoke treatment course. However the more severe forms are generally treated by other methods, such as immunotherapy, in hospitals although treatment for Alopecia Totalis and Universalis has a reported success rate of, at best, around 10 per cent.

If you would like to know more about Alopecia Areata, or how The Belgravia Centre can help treat your own hair loss condition,  message us online or call us today on 0800 077 6666 to arrange a free, no obligation consultation with one of our hair loss experts. If you can’t make it into our London hair loss clinic, you can fill in our online diagnostic form for a home use treatment programme that we can post to you anywhere in the world. The sooner we begin treating hair lost through Alopecia Areata, the greater the chance of preventing further shedding.

Is Hair Loss Influenced by Age?