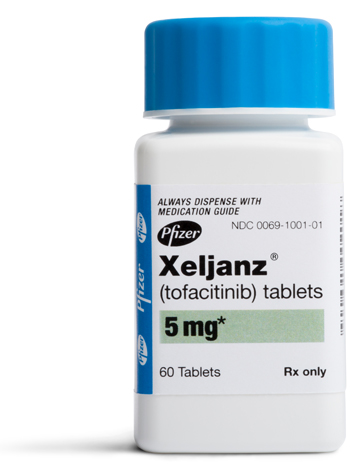 In what could be something of a landmark month for people with autoimmune disorder-related hair loss, the results of a second trial into a potential new treatment method have been announced.

Encouragingly, this new research includes regrowing hair for people with not just the milder condition Alopecia Areata (AA) which causes sudden patchy hair loss of the scalp, but also for its more extreme versions - Alopecia Totalis and Alopecia Universalis - which cause total baldness of the head (and body for AU) and, unlike AA, are currently unable to be treated effectively.

Recently a team at Columbia University Medical Centre in New York has enjoyed “a remarkable response to treatment” in a small pilot study in which they treated 12 people with the JAK inhibitor drug ruxolitinib. Following on from this, teams at fellow top tier US institutions, Yale and Stanford Universities, have announced that they too have seen notable successes from a larger trial using a different JAK inhibitor drug named tofacitinib citrate (brand name: Xeljanz).


This two-centre trial recruited 66 people with hair loss from Alopecia Areata, Alopecia Totalis or Alopecia Universalis for the study. During the study 32 per cent of participants experienced 50 per cent or greater improvement in their SALT score (a measure of the severity of Alopecia) after taking tofacitinib orally for three months.

The downside was that the regrowth does not appear to be permanent, with the researchers stating that “drug cessation resulted in disease relapse in 8.5 weeks.”

In summing up, they wrote: “At the dose and duration studied, tofacitinib is a safe and effective treatment for severe AA, though it does not result in durable results.”

While the full study results don’t perhaps appear quite as encouraging as those seen in the small trial with ruxolitinib (a drug designed to treat certain cancers), the new study into the use of tofacitinib which was developed as a treatment for rheumatoid arthritis has certainly fired up the medical community. Continues below 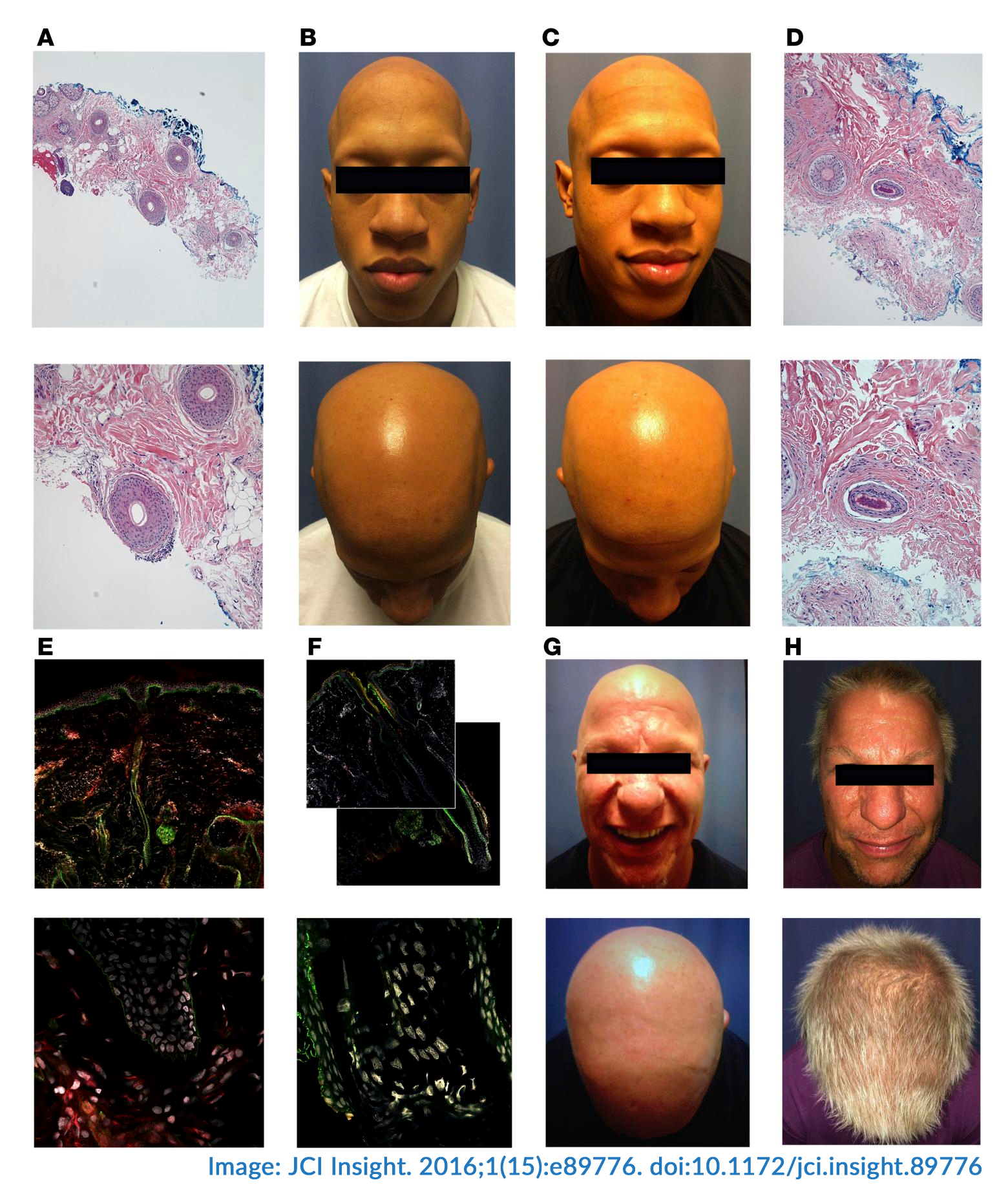 Click to enlarge this image showing disease and inflammation response. (A) A representative non-responder had minimal peribulbar inflammation on initial scalp biopsy (original magnification, ×4 , ×10 ). Histopathology with hematoxylin and eosin stain was performed for all 28 volunteers. (B) Representative non-responder with SALT score of 100 prior to treatment and (C) 100 at 3 months. (D) A representative strong responder displayed brisk peribulbar lymphocytic infiltrate on initial scalp biopsy (original magnification, ×10 , ×20 ), and (E) immunofluorescence of pre-treatment scalp biopsy demonstrated strong follicular staining for STAT3 (red), (F) which was diminished after 2 months of tofacitinib (original magnification ×10 , ×63 ). Immunofluorescence for STAT3 was performed on 3 randomly selected strong responders and 3 randomly selected non-responders. (G) The representative strong responder had a SALT score that decreased from 100 prior to treatment (H) to 13 at 3 months. Immunofluorescence: red = pSTAT3, green = β4-integrin, grey = DNA
Dr Brett King, MD, an associate professor of dermatology at Yale School of medicine and a leading light in hair loss research, told Yahoo News that the findings were: “an enormous step forward, both because Alopecia Areata is the second most common cause of hair loss and because there is a suggestion recently in the basic science literature that the class of medications that the drug belongs to, JAK inhibitors, may influence normal hair follicle development. If this is indeed the case, then there are potential benefits for the most common form of hair loss.”

He is, of course, referring to the genetic condition Male Pattern Baldness and, perhaps by default, to Female Pattern Hair Loss. Together these inherited forms of thinning pip Alopecia Areata into second place, taking the number one spot as the most common cause of hair loss worldwide.

Interestingly, one of the co-authors of the Yale/Stanford study was Dr Angela M. Christiano of Columbia University in New York, whose team was behind the pilot study using ruxolitinib. Her company Vixen Therapeutics was recently acquired by a company named Aclaris Therapeutics, whose President Neal Walker said that the acquisition allowed them to “broaden our focus in hair loss to include Female or Male Pattern Baldness.” 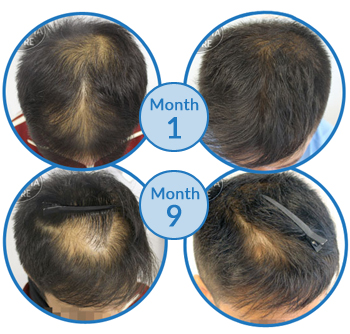 This Belgravia Client Uses a Custom Hair Loss Treatment Course for His Alopecia Areata and Male Pattern Baldness. Click to View More Success Stories (Results May Vary and Are Not Guaranteed)


Janus kinase inhibitors clearly show great potential as future hair loss treatments, and it would appear that the goal for the various American teams would be to develop either one or a suite of new JAK inhibitor-based drugs to treat a multitude of hair loss conditions. Early studies do suggest that the drugs may prove especially effective on cases of Alopecia Totalis and Universalis. However, side effects are a prime concern and drugs are being tested both orally and topically to determine the safest and most effective potential delivery method.

In the rush for this ‘holy grail’, the efficacy of existing hair loss treatments should not be overlooked - especially as it is unlikely these new drugs would be available until at least 2020, assuming the necessary tests are actually passed.

There are currently two clinically-proven genetic hair loss medications which are both MHRA licensed and FDA approved for this purpose. Whilst Alopecia Areata treatment is also possible in some cases, there are not yet any options recognised in this way by the medical regulatory boards.