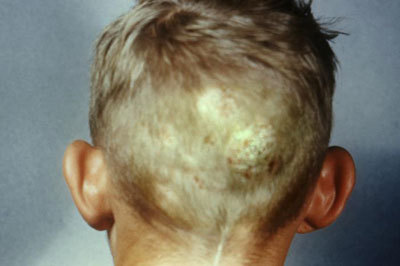 Tinea Capitis is a hair loss condition seen mostly in children, caused by a fungal infection which attacks the skin on the scalp and around the eyebrows and eyelashes. It is thought to be the most common cause for hair loss among children aged three to ten years. Boys are more susceptible to the disease than girls in this age group, although the reason behind this is not clear.

Also known as ‘ringworm of the scalp’, Tinea Capitis damages hair shafts and follicles, causing them to break and shed. The infection often begins in the follicle and works its way along sensitive shafts, causing them to become brittle and eventually break. As the hairs are broken off rather than shed, a tell-tale sign of Tinea Capitis is a black polka-dot appearance in the resulting bald patch. This is actually light stubble where the ends of hair shafts remain in the follicle, the shaft having broken off at the surface of the scalp.

Hair loss caused by Tinea Capitis tends to be patchy and may also be accompanied by grey flakes or scales appearing on the scalp. Other symptoms can include the presence of kerions, squishy swellings on the scalp which can be remarkably tender.

Although the hair loss caused by Tinea Capitis can be substantial, it poses no long-term threat to a child’s health, nor does it have any future bearing on the health of their hair. However, Tinea Capitis is very contagious and easily spread amongst young playmates. Ways of transmitting the disease include the sharing of hair clips, hats, brushes, pillows and similar paraphernalia.

It’s also believed that bruising of the scalp, a frequent side effect of childhood accidents, can provide a convenient entry point for the fungus to enter the body. This may be one potential reason why boys are more likely to pick the infection up than girls, as they are more prone to bumps and bangs generally in childhood. 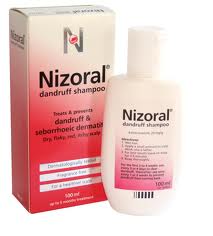 completed. The initial step is to speak to your local GP to confirm the diagnosis; they will then be able to prescribe one of a number of anti-fungal treatments which are effective at treating ringworm of the scalp.

An anti-fungal prescription can be administered in one of two ways. Drugs such as Griseofulvin are taken orally for a period of two months, after which time the infection should be cleared. Alternatively there are two anti-fungal shampoos, Nizoral and Selenium Sulfide, both of which combat the root cause of Tinea Capitis at its source. These shampoos tend to be administered two or three times a week until the problem is resolved.

Once treatment has begun, it is highly unlikely that the child will remain contagious,  and hair will begin to regrow naturally.