The Importance of Hair in Making a First Impression

The award-winning BBC documentary series Horizon explored what it called 'Hair Care Secrets' for an episode broadcast as part of the show's 52nd season.

Noting how hair has become a big business, presenter Dr Zoe Williams told viewers the global hair care industry is currently worth £60 billion, with £1.5 billion of that being spent on treatments for hair loss.

Given the large sums of money involved in caring for it, one of the big questions the filmmakers wanted to answer was: what makes our hair so important to us?


"When your hair doesn't do what you want it to do, nothing else seems to matter either," says molecular biologist, Professor Dame Anne Glover. This is a sentiment backed by research findings from a study at Yale University which discovered a 'bad hair day' led to a marked decrease in self-esteem.

Professor Glover wanted to find out why hair can have such an impact on mood. "One of the theories is that it's down to the split second judgments we make when we meet people for the first time," she noted.

Psychologist Dr Graham Hole noted that it takes "as little as 13 milliseconds to decide whether you find a face attractive or unattractive. That's faster than you can actually consciously be aware that you've seen anything."

In order to demonstrate how influential hair can be to how we are perceived initially, Dr. Hole conducted a small study. Using a number of mothers and daughters he recruited, each mother had to swap hairstyles with their daughter, and vice versa, using wigs.

Dr. Hole predicted this change in appearance should have an effect on the first impression each woman makes. Interestingly, none of the women involved seemed happy with their new hairstyles.


Acknowledging that hair is obviously important to us, Dr. Hole admitted "we don't know what kind of role plays in the perception of things like age, health, attractiveness, and so on." As such, the aim of the experiment was to determine precisely what difference a change in hairstyle could make to a woman's face and how she is perceived.

When random members of the public were shown photographs of each mother and daughter and were asked to guess their age to the nearest year, the daughter's ages tended to be estimated at average of two years older than they actually were. Meanwhile, the mothers' ages were generally estimated to be around four years younger than their real age. 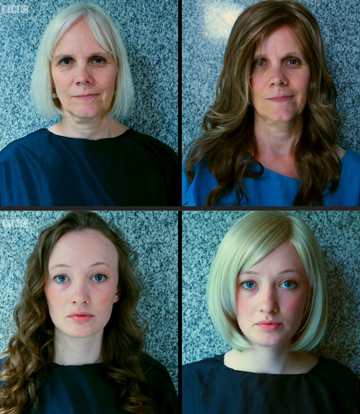 
The mother pictured here found that having her daughter's hairstyle was considered to knock a sizeable seven years off her age. Dr. Hole references human evolution as a reason for this, opining how "younger hairstyles send out telling signals."

"In our past it might have been the equivalent to a peacock's tail - it basically says "Look, I've got so many resources that I can afford to squander them on long tresses". For our ancestors it would have been very useful for them to pay attention to hair because it would have been an honest signal to the age of the person concerned. At least in our past, it has been a good strategy for helping us to decide whether somebody's worth mating with."

The notion that fuller, thicker hair is seen as more youthful than ageing or thinning hair is nothing new. A similar study recently found that obvious signs of male pattern baldness added up to eight years to a man's perceived age.

Many men and women who visit Belgravia tell us the reason they want to start hair loss treatment is that they are worried their shedding is making them look older than they are.

Whilst this very real concern is easily dismissed by some as vanity, the negative effects it can cause to a person's self-esteem are often significant. This is especially true due to the pressures of today's society, including how we are perceived by others on social media and in competitive workplaces where giving the perception of youth can be highly prized. So, looking at the bigger picture, it's no wonder people are keen to take care of their hair, whether this is by dealing with hair loss conditions, taking hair supplements or simply getting a new haircut.