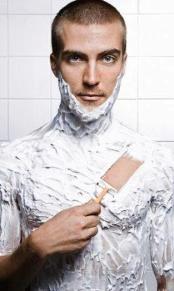 If you didn’t know that “trees look taller when there’s no underbrush”, then you clearly haven’t yet seen Gillette’s “Go Further With Body Shaving” campaign. Whereas once before baldness was equated with old age and lack of virility, it now appears to be a hot trend with metrosexuals and average Joes alike below the neckline that is.

Women have always shaved, plucked and waxed just about every inch of hair on their bodies the amount of pain it takes to look good is incredulous. Now, body baldness is breaking the gender boundaries and Gillette's animated purple characters with pixelated parts even give men step-by-step instructions on "how to shave your groin". While I gather the whole notion of “manscaping” isn’t exactly new, I can personally attest that it seems to have crossed the metrosexual boundaries to secure a position on the high-priorities list of your average Joe.

My 20-year-old brother, who is possibly one of the blokiest of blokes getting around and unfortunately for him has more hair on his chest than the average baby gorilla, recently signed up to a course of laser hair removal. His rationale was that, as our parents spent thousands at the orthodontist on our younger brother’s and my teeth, it’s his turn to do something that will make him feel better about himself. Gillette agrees, “a sweater should be bought not grown." But what’s the appeal for men to have bodies as smooth and silky as a woman's?

Body baldness has been “a hallmark of male models and homosexuals” according to Kat Fay, a senior analyst at Mintel, who writes an annual men’s grooming report. And the aerodynamic benefits of a smooth body have been appreciated by professional sportsmen but now, Ms Fay reveals in a New York Times article, the new campaign aims to convince the average man that body shaving is “the greatest dating weapon.”

They say a peacock with the biggest feathers attracts the most sought after attention Kiss frontman Paul Stanley undoubtedly attracted his fair share  but apparently an overt display of chest hair only masks a man’s basic physical appeal. GQ magazine’s style editor, Adam Rapoport, told the New York Times: “22-year-old guys want to show off their pecs, abs and six packs and don’t want hair getting in the way.” And according to a 2005 study of 118 men, 63.6 percent trim or remove body hair below the neck for reasons of a hygienic and appealing nature.

You know, I had previously presumed the hairy gene was a recessive one (apart from my brother who inherited half the Amazon from our father). From a sneak peak at the opening of a man’s collared shirt to the spread of topless men along a beach, my observations told me that men simply aren’t as hairy as they once were. But perhaps, just like the baldness gene, it’s as prevalent as ever, only more men are doing something about it.

Nevertheless, according to an AskMen.com survey, the majority of women prefer a man with a bit of hair on his chest. In fact, 76 of the 100 women polled said they like seeing hair on a man's chest but just enough to run their fingers through it and a third said they liked the entire chest and stomach covered with hair. On the flip-side, 93 percent were against back hair of the sweater variety, not the odd welcome mat and when it comes to hair below the belt, well, 88 percent of women expect a man to keep things neat down there. Although I’m not sure that if you look up ‘neat’ in the dictionary you’ll find a spindly-looking tree in the middle of the desert.

Still, as the Gillette-fuelled trend to eliminate superfluous hair gains momentum, the battle against the bald wears on. Gillette's take on hair loss is, "if the grass is patchy, mow the lawn". But as more men are swept into the trend to wax, shave and laser the hair on their bodies, like Wayne Rooney they’re also turning to hair loss treatments to keep firm what they’ve got on their heads, rather than shave it off.

Hair is always going to be a contradictory conundrum. Indeed, there are times in the dating game when hairlessness can be a deal breaker. Despite Gillette’s opinion of underarm hair ("an empty stable smells better than a full one"), 94 percent of women find it odd when a man doesn’t have any, and while some women find the bald look attractive, they’re five times more likely to be attracted to a man with a full head of hair.*

I for one am all for men embracing their hirsute and hairless rights (where applicable) I know my brother’s a real catch, with or without his sweater and if you ask me, Bruce Willis is still one of the best looking guys in Hollywood but there’s no doubt that cultural trends are impeding men’s confidence to accept these characteristics. 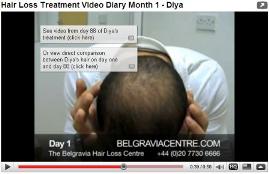 Then again it might not be that bad perhaps even the start of a new era in gender equality. If it makes you feel better about yourself, what’s the harm in a back, sack and crack? Some say it takes a brave man to go through that experience. Others might say all it takes is stupidity. If you share the latter opinion, Gillette can show you how to “trim the bush to make the tree look taller” painlessly and within the comfort of your own bathroom. And if you’re having the opposite problem on your head, take a look at one man’s experience and his hair loss treatment results on YouTube.