Some forms of hair loss can affect children as well as adults and, despite being an autoimmune condition, Alopecia Areata is one of the most common.

As part of a campaign by charity Alopecia UK, the mother of Louie Savage, a 10 year old goalkeeper with Crystal Palace FC's academy, has revealed his story in the hopes of inspiring others. 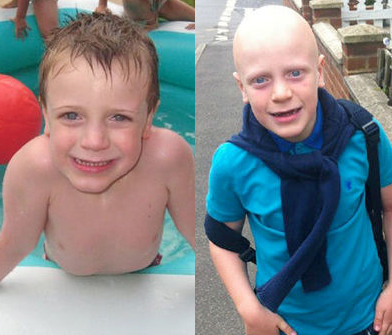 Speaking to the Express, Louie's mum, Laura says she first noticed two small bald patches, each around the size of a 20 pence piece, on his head when he was just five years old. By the time he turned six, Louie had only 40 per cent of his hair left.

Doctors tried giving him cream and topping up his iron levels but, despite having periods of regrowth, five months later the six year old was diagnosed with Alopecia Universalis. This is the most severe form of Alopecia Areata and causes complete hair loss from head to toe.

Not understanding his condition - which was initially misdiagnosed as a fungal infection- when he went back to school, the reaction to Louie's obvious hair loss was one of shock. "People would stare at him and think the worse - that he was drastically ill or undergoing chemotherapy," explains Laura. "That had a great impact... it was a real mental battle."

Now aged 10, Louie has 'fits and starts' of hair regrowth with 60 per cent of his hair having returned earlier this year. The hair grew back white but once the pigmentation returned, sadly it all fell out again.

His family were shocked to hear Louie's autoimmune condition was most likely triggered by stress brought on by the traumatic birth of his sister during which both his mother and sister nearly died. "I was surprised to hear it could have triggered Louie's alopecia. It made me think, 'how does a six year old become so stressed that he loses his hair?'" Laura said, recalling what she describes as "a fraught time for all of us".

Whilst the Express reports that the little boy's condition is 'permanent', whilst likely, this may not actually be the case. In all cases of alopecia areata the hair follicles are shocked into suspending the normal hair growth process. The follicles lie dormant awaiting a signal to resume activity; unfortunately when, or even if this sign will come is currently impossible to predict. 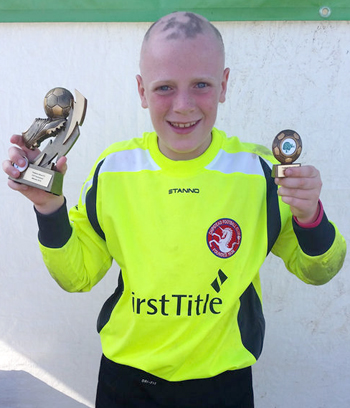 Now Louie (pictured) and his family are backing the Alopecia UK '#AlopeciaDoesntStopMe' campaign which aims to raise awareness and acceptance of all forms of Alopecia Areata. It also hopes to educate the public about this disorder, which is the second most common cause of hair loss in the world.

The hashtag - developed as part of September's Alopecia Awareness Month - is also being used to encourage those affected to understand that they are not defined by their hair and for people to post photos of what they can do regardless of their hair loss - just like football-mad Louie.

Laura told the Express: "It would be amazing to see kids who have alopecia getting together, talking about their favourite football teams or bands. Kids who have alopecia are no different to other kids. A group like this would make them feel like they're not completely alone."

There are currently no effective treatments for alopecia universalis although scientists are investigating a number of drugs which may have the potential to treat this in the future. In the meantime, charities like Alopecia UK and the Little Princess Trust are an invaluable source of support and information for children with Alopecia Areata, as well as their families.