An especially stressful year in the life of the great American-born poet, playwright and essayist T.S. Eliot left him with a worrying bout of hair loss, according to a collection of his letters recently published in a new volume.

Writing about the release of the book The Letters of T.S Eliot, Volume 6, 1932-1933 The Spectator magazine picked up on one of the literary genius’ missives to the British academic and poet Geoffrey Faber. Eliot told him: “I am going Bald (having an ancestor named Charles the Bald) but not reasonably like you; in Spots a Spot the size of a Butter Dish behind my right ear.”

In another letter to American poet Ezra Pound, Eliot wrote: “My Hair started coming off of one side just before I left for America; that’s over a year ago.” 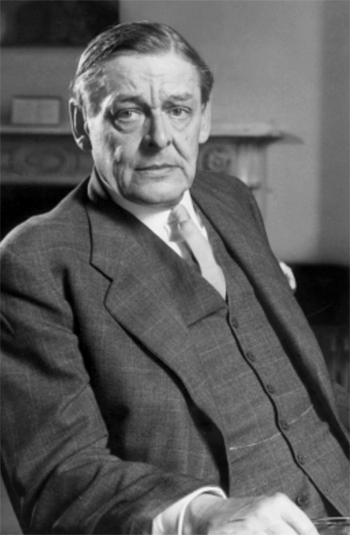 Eliot’s lengthy American tour of 1932-33 and his separation from his wife Vivienne all seem to have added to the writer’s stress around that time, and given his description of the hair loss, it is likely that his condition was stress-induced Alopecia Areata.

Eliot wrote in one letter that his hairdresser had recommended a lotion to help regrow his lost hair but that she had warned it may grow back white. This adds further weight to the idea that Eliot had Alopecia Areata, as hair lost to Alopecia Areata does sometimes lose its colour when it grows back. In fact, this is thought to explain why convicted killer Oscar Pistorius was seen sporting patches of white hair while he was on trial for the murder of his girlfriend.

Alopecia Areata is generally accepted to be an autoimmune disorder, in which healthy cells in the scalp come under attack from the body’s immune system which have erroneously judged them to be foreign cells.

There are a number of suspected triggers for the condition, including infection, chemicals, allergies and local skin injuries, though a great many cases are thought to have been brought on by sudden shock or stress.

What seems a less likely diagnosis in Eliot’s case is Male Pattern Baldness. While this condition is irrefutably the main cause of hair loss in men and diagnosed in the majority of hair loss cases, it doesn’t fit with the description of the writer’s hair falling out in patches.

While male hair loss can be exacerbated by stress, it is a genetic condition, handed down from either the maternal or paternal line, and manifests itself not as patchy hair loss but as a much-seen hair thinning around the top of the head and around the temples. Even though Eliot mentions a relative known as Charles The Bald in his letter, photographs of the writer in later life suggest a rather robust hairline which would not be synonymous with many years of hereditary hair loss.

Both Alopecia Areata and Male Pattern Baldness can be treated, and had Eliot been alive today he would have had a far greater chance not just of halting his hair loss, but of ensuring new growth. A personalised hair loss treatment course, prescribed following a diagnosis by an expert, can frequently add many years to the natural life of a man’s hair.