X-Files actress Gillian Anderson has revealed that years of heavy styling for film and TV roles has taken its toll on her hair, with the result that she is suffering from hair loss.

She told Entertainment Weekly that her “hair started falling out last year. We were in the middle of doing The Fall and they actually had to stop using tongs and hot rollers because it was literally coming out in the hair-dresser’s hand.” 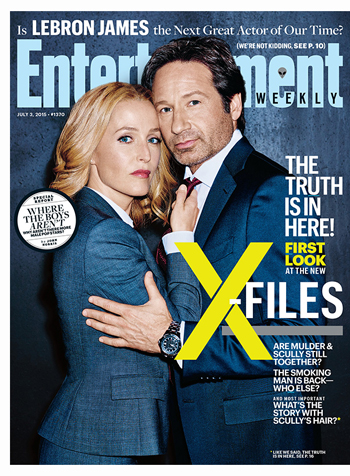 The revelation came to light after fans of the star spotted her wearing a strawberry blonde wig on the set of a new X-Files mini-series that was being shot in Vancouver. “On the second day, during the lunch hour,” she told Entertainment Weekly, “there were 9,500 people sitting around on their phones taking pictures and videotaping us and someone Tweeted a close-up of the net of my wig.”

The wig (which she is wearing in the magazine cover pictured) was a last resort for Anderson after her stylist told her she’d be mad to try and return to the signature red locks of her X-Files character, Agent Dana Scully, using hair dye.

It wasn’t so much the red dye itself that was the problem, more the notion of stripping out the colour later in the year so that she could go back to the blonde hair she sports in BBC drama The Fall. Her stylist said that this would be too much stress to place on her hair.

Anderson explains how the wig, which was made in London,“is like wearing a vice on your head.” Every day, the actress told Entertainment Weekly, it leaves her with a “whopping headache.”

Headaches caused by wigs, weaves or even hairstyles such as high ponytails, braids or buns, can be a clue that your style is too tightly fixed.

Placing excessive tension on the hair follicles leads to headaches in the short-term but, if the style is worn constantly, it can stretch them out of shape. This results in a hair loss condition known as Traction Alopecia which mostly affects the hairline, which may appear to recede, leaving some small broken hairs, as well as causing patches of shedding where the tension was placed, for instance where hair extensions or a wig were attached.

Whether or not Anderson has a medically-recognised hair loss condition or has, in fact, simply been overdoing it with frequent dyeing and use of heat styling tools is unclear. If it is the latter, it can still result in noticeable hair breakage where the hair snaps along the shaft due to becoming brittle and malnourished making the hair look thin and slightly frizzy. 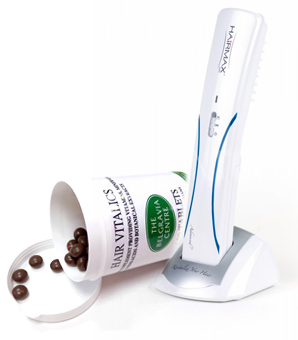 Intensive conditioning and a good haircut can help by adding moisture back into the hair and dealing with breakage. However, assisting the hair “from within” can also nourish the hair. One way Anderson could restore her hair’s health is to ensure she is getting a good nutritional intake through her diet. If this is not always possible, particularly when she is away filming, she could always top up with a specially-targeted daily supplement such as Hair Vitalics.

Another option is an FDA-cleared product called the LaserComb, a patented device that emits a low-power laser onto the scalp to promote hair growth. Depending on which model is used, it takes between 8 and 15 minutes of gentle, slow combing, three times a week.

Both of these hair growth boosters are often used in combination with the hair loss treatment, minoxidil to effectively treat thinning hair in women. This approach can also be taken in cases where styling damage has caused severe shedding, or has triggered a condition such as Female Pattern Hair Loss or Telogen Effluvium.

As Gillian Anderson’s hair is so important to her lifestyle and career, it would certainly be a good idea for her to visit a hair loss clinic as soon as she finds a break in her busy schedule so that she can get a professional diagnosis and treatment recommendations to hopefully allow her to ditch the wig!