What happens when you desperately want to keep your hair but have a hair loss condition or severe level of baldness which is unsuited to treatment?

For many the first avenue to explore is surgical restoration, however, if the type or level of hair loss is unsuited to pharmaceutical treatment, often a hair transplant may not be possible either. This tends to be when cosmetic options come into play - wigs, hairpieces, or the more firmly-affixed hair replacement systems. The term ‘hair replacement system’ is often used to refer to the more modern varieties of natural-looking hairpieces which are semi-permanent and are generally used when a person's condition or stage of shedding means they are no longer suited to hair loss treatment.

Hair replacement systems typically connect hair be that synthetic or human to a person’s scalp, often by securing new strands to existing hair, via one of a number of different non-invasive methods. This often involves strands being woven through a base layer constructed from mesh, lace or silicone which is then affixed to the scalp using bonding adhesives, tape or clips which grip to the existing hair which can also be woven through the base cap.

Now, however, the Israeli company Hairstetics has announced plans for a study into how well their hair replacement system, featuring scalp implants to hold the system in place, can help people with various forms of hair loss.

While little information about the nature of the anchoring system is given in the study registration and the Hairstetics website is under construction at the time of writing, there are some details about what they appear to be using on the website of an Israeli venture capital fund named Crossroad. 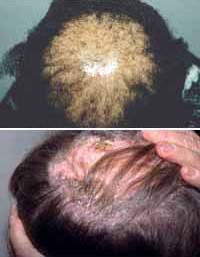 It states: "Hairstetics is developing a multiple-hair implantation device for a non-surgical treatment of baldness. The user-friendly device can be easily operated by an MD or a cosmetician and adapted to both natural and synthetic hairs. Capable of matching a baldness progression, the solution simplifies the current implantation procedure, shortens its recovery time, and results in a superior aesthetic effect at a lower cost.”

While it is certainly true that hair lost through scarring eg. Cicatricial Alopecia cannot generally be recovered and is often permanent so may be suited to a hair replacement system, people with pattern hair loss  mentioned as potential test subjects in the Hairstetics study registration  do have a number of proven, less extreme options available to them as long as help is sought early enough.

“In cases of male and female pattern hair loss, in order to prevent the effects of this genetic condition from worsening and to help regrow thinning hair, it is always advisable to seek help as early as possible. There are clinically-proven hair loss treatments available and when used early enough can help regrow hair in both men and women,” says Belgravia senior hair loss specialist, Leonora Doclis.

"This is particularly true of men as, whilst genetic hair loss in women displays as thinning around the top of the head, it rarely leads to true baldness. True baldness from male pattern hair loss is where the skin takes on a shiny appearance after hair follicles die. This means the follicles are immune to stimulation from treatments, so men no longer have this option to help retain their hair, which is why a proactive approach is advisable." Various types of hair loss to be studied

Trial registration documents further state that Hairstetics wants to test for “an acceptable number of anchoring systems that holds their respective hair extensions: one anchoring system is comprised of a linear set of 12-20 miniature implants.”

The idea of artificial hair implants is nothing new, it is however rather controversial, having been banned in a number of countries for many years due to the high rejection rates.

Patient satisfaction at the end of the three-month Israeli study will also play a big part in its findings which is particularly interesting given the struggles people who had them in the past reportedly complained of.

The initial Hairstetics study was due to take place in 2014 with results expected to be announced in August 2015 but this trial into both the safety and efficacy of the anchoring system product, which involves having miniature anchor devices implanted into the scalp, appears to have been delayed.

The registration at clinicaltrials.gov reveals that the study is still not yet recruiting participants and the completion date is now listed as March 2017. As soon as more information becomes available, we will bring you an update here on the Belgravia hair loss blog.