A new study, recently published in the EBioMedicine journal, has been carried out into the effectiveness of Baricitinib as a treatment for Alopecia Areata.

Baricitinib is a cancer medication which features the JAK inhibitor tofacitinib and is currently being trialled for the additional treatment of rheumatoid arthritis, psoriasis and diabetic nephropathy.

The research into its suitability as an Alopecia Areata treatment was carried out by a team which included Dr. Yuval Ramot, Professors Abraham Zlotogorski and Yackov Berkun, as well the noted Professor Angela Christiano, who has personal experience of alopecia.

As with the discovery of other hair loss treatments, researchers in Israel uncovered baricitinib's potential in this area almost by accident. The drug was given to a boy being treated for concomitant CANDLE syndrome who, by chance, also suffered from Alopecia Areata.

After the treatment, the doctors identified significant regrowth in the areas affected by the condition's hallmark patchy hair loss, as can be seen in the images from the study pictured below.

Following the discovery, more studies were carried out with mice at America's Columbia University, in addition to clinical trials, which supported the initial findings and suggested that Baricitinib may well be a potential treatment for Alopecia Areata.

This is not the first study of its kind: other similar drugs - known as JAK Inhibitors -  are also currently being tested for the treatment of different types of Alopecia.

Ruxolitinib, which is commonly used to treat a bone marrow disease called myelofibrosis, has had positive results in earlier small trials. The drug was given to three male alopecia areata sufferers in the form of a twice-daily pill and, within five months, all of the men regrew their hair.

Similarly, rheumatoid arthritis drug Tofacitinib Citrate (which has the brand name of Xeljanz), was found to have a positive effect on Alopecia Universalis in a study of one individual. Xeljanz is known to have some serious side effects, including the risk of contracting infections, tuberculosis and cancer, and has not yet been approved for use as a treatment for Alopecia Universalis in the UK . However, clinical trials are ongoing. 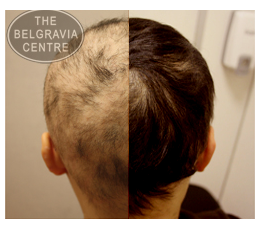 In addition, other studies into areas such as improving the efficacy of topical immunotherapy and investigating the impact of Vitamin D on Alopecia Areata, all hope to further increase our understanding of these autoimmune hair loss conditions, and eventually lead to the development of a safe and practical cure.

In the meantime, although it is only medically-proven for the treatment of genetic hair loss, many Belgravia clients with Alopecia Areata have seen promising regrowth results from treatment programmes based around high strength minoxidil.

If you are concerned about patchy hair loss, or if you would like more information on treating alopecia, contact a hair loss specialist who will be able to provide you with expert, personalised advice.