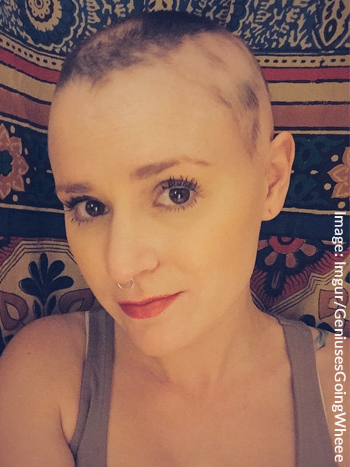 An American student named Samantha LaMeres has spoken out about the devastating effect her hair loss has had on her life and asked well-wishers to help her pay for a bespoke, $2,200 wig that will enable her to get back the “outlandish personality and self-confidence I once had.”

Ms LaMeres’ dramatic shedding began in 2007 when she was diagnosed with the autoimmune disorder Alopecia Areata, which affects up to two per cent of Americans in their lifetime. Unlike genetic baldness, the condition typically leads to sudden, patchy hair loss, and those affected regularly report feelings of extreme distress when they see their hair so rapidly and inexplicably disappearing.

Wants to 'change the world'

The condition has a number of known triggers, ranging from shock and sudden extreme stress to allergies. While hair grows back of its own accord in more than half of all cases, in others it can spread and/or linger for many years, often resulting in serious psychological upheaval.

For Ms LaMeres, as her bald patches grew larger, progressive hair loss of this nature resulted in dramatic action: she began shaving her head from 2013 onwards.

While she states on her appeal page that she tries to remain positive, she is under no illusion that everything is the same as before she was diagnosed. According to PopSugar.com, in desperation she tried to get a top-quality wig funded by her health insurance, but - after an initial erroneous confirmation of her claim - they turned her down. 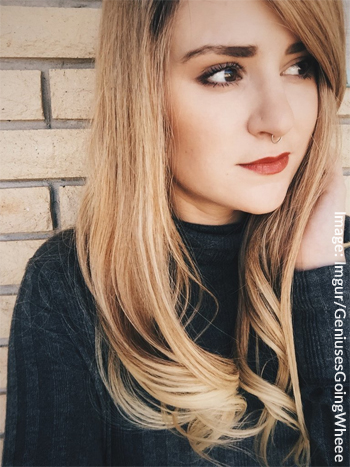 A cheaper option that she saved up to buy, and is pictured wearing here, turned out to be of low-quality and prone to deterioration.

Now studying biology and immunology at the University of Montana in the hope of trying to explore new Alopecia Areata treatment options, Ms LaMeres decided that by sharing her story on social network Imgur and setting up a GoFundMe page she might have some success in raising the money she needed for a new wig. "Receiving a new wig would change the world for me, so hopefully I can go on and change the world for many others with my condition," she wrote.

It seems to have worked: after just one day her story had gone viral and she had raised $1,900 of her $2,200 target. Donors appear moved by the way that Ms LaMeres has emphasised how much the wig will help her regain her self-esteem. Far from being a mere case of vanity, her story highlights once again how loss of hair can be so damaging and how a wig can go a long way to redressing the balance.

It is unknown if Ms LaMeres has tried any kind of alopecia areata treatment. However, hair loss specialists at Belgravia have seen notable success with high strength minoxidil, whose topical formula has been shown to stimulate impressive regrowth results in many clients.

In the future, more treatments for Alopecia Areata and its more severe forms Alopecia Totalis and Alopecia Universalis look set to become available, even if a hallowed one-pill-fits-all style solution is likely to be many years away.

Belgravia is especially interested in the possibilities offered by a number of JAK inhibitor drugs, though they face significant hurdles before they stand a chance of being cleared by relevant government bodies for use on people with this type of autoimmune hair loss.