An American research student whose hair loss has been caused by a lifelong struggle with trichotillomania a pulling disorder that can be very difficult to treat thinks she has come up with a lotion that could help others with the condition.

Emily Kight is now crowdfunding for the next phase of her journey, which will hopefully help her to take her newly-developed leave-in conditioner product to a wider market.

Ms Kight, who is 27, tells the Mail Online that she has had trichotillomania for 20 years, and that it first started when she began pulling out her eyelashes while wishing for world peace after being told as a child that blowing on eyelashes would make a dream come true.

She says: “It was my seven-year-old version of fixing things and became a way of coping. I remember my parents being so disappointed with me when I had pulled out all of my eyelashes, but it became a thing I couldn't stop for some reason and moved onto other areas.” 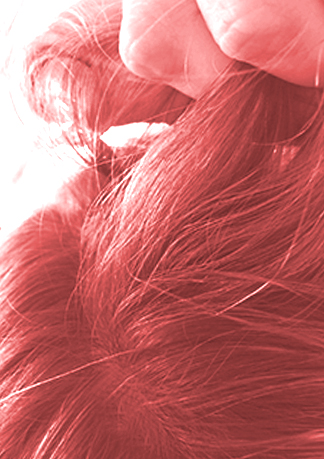 People with the condition have a fixation with pulling out hair on their head, face or body (sometimes all three). When the scalp is the focus (as it is in around 70 per cent of all cases), the hair loss can either be patchy or more of a generalised, diffuse hair thinning. It is a condition that affects far more women than men, and is regarded by the medical community as a psychological disorder.

“Trichotillomania is such a manic thing,” says Ms Kight. “Everything with my life was out of my control, I struggled with anxiety and depression, I didn't manage any of it so pulled at my hair.”

Treatment for trichotillomania usually involves counselling as a way of helping someone to remove or better deal with the urge to pull. Cognitive Behavioural Therapy (CBT) is popular as it can help those affected to identify their triggers, thereby helping them learn to better cope with and respond differently to them.

But therapy doesn’t always work and it can be expensive/hard to find depending on where you live in the world. So Ms Kight wondered if there was an alternative: something else that would help trich sufferers to resist the urge to twist and pull. “When something itches, we put ointment on it,” she writes on her GoFundMe page. “Why not with trich? Unfortunately, existing numbing creams I tried weren't suitable for use in the hair and they did not work.”

Intrigued, she set about creating a new formula that would chill the scalp and could be applied like a leave-in conditioner. The result is a lotion she has named Prohibere, and it contains active ingredients like menthol and camphor, as well as nourishing oils. She says it helps the scalp to be “cooled and relaxed, providing a tingling and cooling sensation to relieve impulses from trichotillomania.”

In terms of dealing with hair growth after trichotillomania, if follicles have not been damaged permanently to the point where there is scarring or smooth bald patches, this should grow back naturally. Depending on the level of trauma experienced, this can take around six months or sometimes more. Once pull-free, however, if required, this regrowth process is something that can often be helped along by a tailored treatment programme from a specialist hair loss clinic.

Pulling reduced by 75 per cent

Unfortunately, the product is not yet available, which is precisely why Ms Kight is trying to raise $10,000 via her crowdfunding initiative. Prohibere is available to pre-order, however, and while Ms Kight admits that it might not work for everyone with the condition, she says that an early test batch funded by a $10,000 prize she won in a competition at the Temple University Fox School of Business Innovation in Philadelphia, her home town has helped reduce her pulling by 75 per cent.

She has further been encouraged by academic research that she has unearthed about the potential benefits of using a numbing cream as an adjunct treatment for trichotillomania, and also the positive feedback that she says she has received from doctors who are experts in the field.