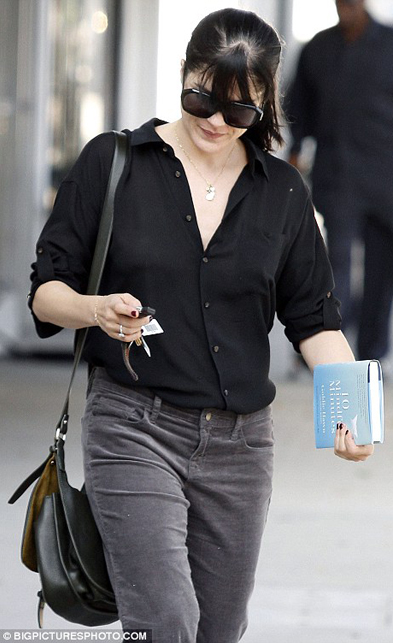 Hollywood movie and TV star Selma Blair has taken the unusual step of going on record this week to discuss a significant loss of hair following the recent birth of her son Arthur Saint. The 39 year old star of Cruel Intentions, Hellboy, The Fog and recently completed Replicas has been experiencing post-partum hair loss. Recent press photographs show distinct thinning patches in Blair’s hair clearly demonstrating the condition she has been discussing.
During an interview with People magazine, Blair made the startlingly candid revelation saying, ‘This is so not glamorous, but it’s true: I need to take longer showers so that I can collect the hair that falls out and throw it away so I don’t clog the drain.’ She then went on to explain that her hairloss began three months after giving birth and is not showing any signs of slowing as yet.
Blair appears to be taking the loss of hair relatively well, joking, ‘I’m not a girl who likes extensions, so Selma’s going to be bald!’

During pregnancy, many women notice that their hair is both thicker and more lustrous than normal. Hormonal changes, particularly elevated levels of oestrogen, cause significant changes in the way that a woman’s hair grows over the nine months of pregnancy.
Normally, only 80-90% of a woman’s hair is growing at any given moment in time. The other 10-20% of her hair follicles in a resting status known as ‘telogen’, during which the attached strand of hair stops growing and falls out. Typically a woman loses between 50 and 100 hairs each day.
During pregnancy however,  the elevated levels of oestrogen in a woman's body force every hair follicle out of the resting phase, so that a woman experiences 100% hair growth. It is this increase in normal growth which creates a thicker, fuller head of hair as commonly reported by pregnant women.
After the birth of her child however, the woman’s hormone levels return to normal, as does her usual hair growth cycle. This means that 10-20% of her hair returns to it’s resting state and falls out. For the unprepared, this hair loss can be quite shocking, particularly as many women become accustomed to the additional hair growth.
As in the case of Selma Blair, hair loss does not happen immediately following birth but takes a few months to become apparent. Much of this is down to the fact that hair follicles in the telogen phase  take a few months to drop. Post-Partum hair loss can therefore be mistaken by some people as an indication of a more sinister condition when in fact the whole process is completely natural.

The good news about Post-Partum Hair Loss is that being a completely natural process there is generally no need to worry about it. Usually any hair loss in the months following delivery of a baby is completely natural. It is also extremely unlikely to be noticeable by anyone other than the new mother as she washes her hair.
Because Post-Partum hair loss is linked to fluctuating hormone levels, there is generally no essential need for treatment, although using the right treatments can ensure the fastest and fullest regrowth. The hair loss will stabilise once hormone levels reach equilibrium and hair follicles settle back into the routine of telogen phases which should take no longer than six months following the birth.
In the event that hair loss seems to be continuing beyond this, women should seek advice from a hair professional who will be able to ascertain whether the shedding is attributable to something other than normal post-pregnancy alopecia.
The Belgravia Centre is experienced in dealing with hair loss in women as well as in men and can offer a variety of effective hair loss treatments based on the diagnosis as well as each client's individual needs and medical profile.
The good news for Selma Blair is that she is still only in the fourth month of motherhood and, therefore, the thinning hair she has been experiencing is perfectly normal as her oestrogen levels return to normal.