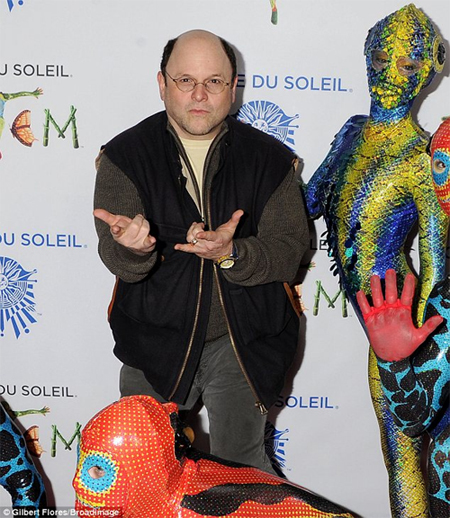 Popular funnyman Jason Alexander stunned celebrity watchers when he appeared on the red carpet at the Cirque du Soleil revealing his advanced case of Male Pattern Baldness. The surprise was caused by the fact that Mr Alexander, who played the role of George Louis Costanza in the hit US comedy Seinfeld, has been wearing a toupee for many years since the show finished.

Fans of Seinfeld will remember that even in the early days of the show, which started in 1989, the character of Costanza was always bald. Jason Alexander himself claims to have gone bald at the age of 30. However in an attempt to overhaul his image, Jason Alexander had apparently taken to wearing a hairpiece in recent years.

Despite never being embarrassed about his hair loss, the popularity of Seinfeld meant that Alexander’s personal image had become inextricably bound to the character of George Louis Costanza: “I am a character actor, but I’m equated with one character. And it used to just be by the audience, and now by my own industry. So the first thing I said is, ‘All right, you guys, (I) gotta shake it up a little bit.”

Jason Alexander is clearly at ease with his hairless head, but he does admit that there was an aspect of “pure vanity” to his decision to begin wearing a toupee: “I was doing a part, they put one of these on me and I went, ‘That’s kind of cute.’” Further positive pressure from his wife encouraged him to persevere with the hairpiece who claimed it helped improve his appearance during stage performances: “No matter what product I used on my head, the lights would bounce off my head like I was wearing a pith helmet.”

The plan had been to save the hairpiece for performances, but Jason Alexander found that the on-again, off-again approach led to too many questions from confused fans. So the toupee has since become something of a permanent fixture, helping to explain some of the surprise caused by his hairless appearance at the Cirque du Soleil.

However the announcement of the long-awaited Seinfeld reunion means that Jason Alexander’s hairpiece may be consigned to history once more. That is of course unless the show’s writers decide that George Louis Costanza has undergone hair loss treatment since the last series aired in 1998!