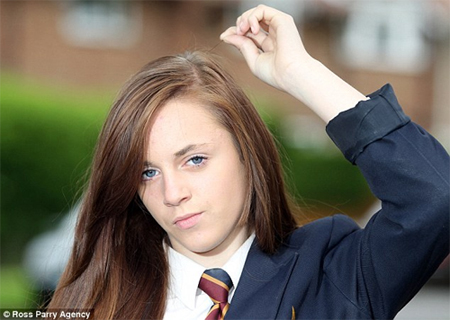 The Daily Mail recently told the unusual story of Courtney Blades-Wilkinson, a 13 year old girl who, along with a classmate, had coloured hair extensions fitted to celebrate her birthday. Whilst this may seem like an innocent treat for a young girl, coloured hair is a breach of the rules at Graham School in North Yorkshire (the establishment that both of the girls attend), and they were instructed to take out the extensions. Unfortunately, the offending items were glued into the hair of both girls, and were not easily removable causing the teacher involved to take some drastic action.

According to Courtney’s version of events, the teacher attempted to melt the glue securing the extensions with a heat gun. When it became apparent the glue was not melting as expected, the girls were ordered to cut the extensions from each other’s hair using scissors.

Since the botched attempt at removal, both Courtney and her friend report being traumatised by the experience, and say that their hair has been damaged as a result. Not only do they have mismatched cuts from where the extensions were chopped out, but also matted clumps of hair where the glue was melted.

Obviously the methods of removal that were reportedly used are far from perfect hair care techniques, but there is a possibility that the teacher's advice was correct, despite the fact that they acted on it in an inappropriate way.

Hair extensions have been known to cause hair loss, because of the tension they place on the wearer’s follicles. Celebrities such as Katie Price have been photographed many times sporting bald patches developed as a direct result of wearing hair extensions regularly.

Regular hair extension wearers report that they feel the additions are essential; some even go as far as to say they have become addictive. As soon as any patchy hair loss is noticed, the first thing many women try is having the extensions replaced to cover it up but doing so will actually increase the risk of further damage.

Although the methods chosen for the removal were undeniably unsuitable, taking the hair extensions out may prevent the girls from experiencing any further hair related issues as a result of continued extension wear.

Hair loss caused by extensions can be difficult to treat. The permanent wearing of hair extensions can result in a condition known as Traction Alopecia, where the hair follicles have become deformed, therefore preventing natural hair growth. As soon as any patchy hair loss is noticed, women should have their extensions removed, and then seek advice from a professional hair loss expert. Children under 16 are especially advised never to wear hair extensions, as treatments for regrowing hair are not available to those under the age of 16.

Here at The Belgravia Centre, we have a proven track record of treating adults with Traction Alopecia caused by extensions, braiding and cornrows. You can read the experiences of many of our satisfied patients in our archive of Success Stories.

If you are concerned about the effect hair extensions may be having on your own hair, we can provide you with a bespoke treatment plan, tailored to the individual needs of your hair. Why not contact us online or call us today on 0800 077 6666, to arrange a free, no obligation consultation with one of our hair loss experts? Alternatively, you can fill in our online diagnostic form for a home use treatment course that we can post to you, no matter where you are in the world.