Rosario Dawson Shaves Off Half Her Hair, Considers Going Bald 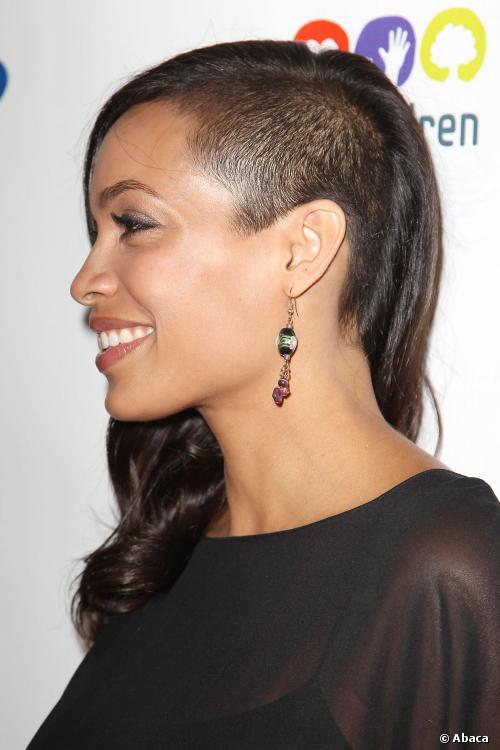 She made waves earlier this year thanks to her role in Danny Boyle's film Trance, and Rosario Dawson is certainly not one to shy away from making a statement. In this vein, the Sin City star has now spoken out about her plans to shave her head in the future.

The 34 year old actress is already well on the way to sporting an edgy hairstyle after shaving off some of her long locks in preparation for filming her role in the Sin City sequel due out next year, called A Dame To Kill For. Speaking to OK! online, the star said she was "thinking about going bald at some point".

Elaborating, Dawson explained that: “I have a couple friends who have done that, and the thing about women and their hair is we’re supposed to be very attached to our hair for our beauty, and I know a lot of women who are bald that are gorgeous.”

The star has been especially inspired by her mother, who shaved her hair into a mohican style, adding that: "She was bald, and she looked incredible, so I feel slightly confident that if I have her head shape, I’ll be alright. I think it will be fun. It feels good. Even people I know who have gotten cancer, one of the things they've been able to say is that instead of fighting it, just really go with it, and revel in going, ‘I can feel a part of my body that I was never able to feel before.'”

At Belgravia, we applaud Rosario's brave attitude towards going bald, and hope that should she go the whole hog, she will be a source of inspiration for women who are dealing with hair loss. Whilst 95% of men with hair loss have their genes to thank, hair loss in women can be a little more complicated.

For instance, whilst female pattern hair loss can cause hair loss on account of a genetic predisposition to DHT sensitivity damaging hair follicles, this is just one of several potential causes.

Whilst pattern hair loss usually appears as a thinning atop the scalp, sudden patchy hair loss could be due to the auto-immune disorder alopecia areata. This disease can be triggered by various factors, ranging from chronic stress to allergies and local injury. In extreme cases, the condition can develop into alopecia totalis (when all scalp hair is shed) and alopecia universalis (when all body hair is shed).

If hair loss from alopecia areata is still at the patchy loss stage it, like female pattern hair loss, can be treated using minoxidil. This topical treatment has been licensed by the MHRA (UK) and approved by the FDA (US), and can be varied in both dosage and added ingredients on an individual basis.

It's All About Choice

Women may also find that their type of hair loss clears up by itself. Hair loss due to cancer treatments should generally grow back in the months after treatment is completed, and hair loss conditions such as telogen effluvium, which can be caused by stopping taking the contraceptive pill, for example, generally fix themselves once the underlying problem has been dealt with.

If you're experiencing hair loss and you're unsure what the cause may be, the first step would be to visit your doctor for some blood tests, which can rule out hair loss due to nutritional deficiencies and hormone imbalance. A hair loss specialist would then be able to diagnose you, and a bespoke hair loss treatment plan that includes minoxidil, and a variety of treatment boosters such as nutritional supplement Hair Vitalics to ensure all-round hair health, can be devised.