White Stripes and Dead Weather star, Jack White provoked comment as he attended the launch of Jay-Z's new music streaming service, Tidal. But it had less to do with his music and more to do with his new hair. 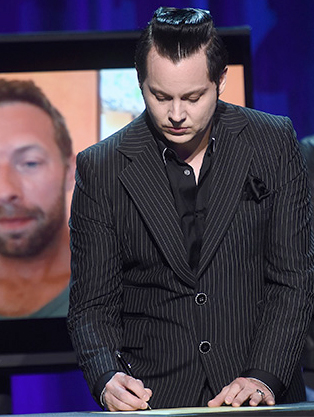 The award-winning rock musician appeared as part of a stellar line-up featuring Kanye West, Beyonce, Daft Punk, and Madonna, having fashioned his dyed-black hair into a theme-appropriate 'tidal wave' style. Influenced, like his music, by country rock and early punk, his slickly coiffed pompadour revealed a distinct widow's peak hairline.

This prompted discussion among internet users about his potential hair loss; some speculated that he was 'a clear Norwood II', referencing the scale used to measure male hair loss, whilst others offered to 'pray for Jack White's hair', although many female Twitter users seemed to like his new haircut.

A widow's peak is where the hair forms a V or M shape at the hairline. This can occur naturally but it can also be one of the first signs of male pattern baldness.

Is Jack White losing his hair?

Whether or not the Seven Nation Army singer is experiencing male hair loss remains to be seen. He has previously tended to prefer messier hairstyles, wearing his hair long and covering his face so that his hairline was not visible, followed by a predilection for wearing hats. Because of this, it is hard to compare his hairline to say for sure whether the peak has become more pronounced over time.

However, White has had noticeably thinning hair on top for a few years now. This is generally visible at his parting, which is now covered by his new hairstyle, and could indicate that the 39 year old may be experiencing this progressive, genetic hair loss condition. So it could well be the case that his widow's peak is the result of a receding hairline, specifically around the temples, causing the front peak to become more prominent. 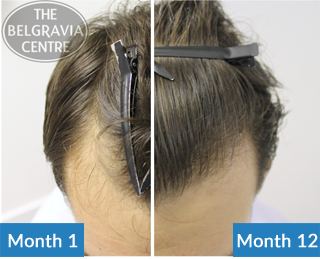 This Belgravia Client is using our Male Hair Loss treatments to restore his receding hairline. Click the image above to see his photoscans and Success Story

Men battling a receding hairline may be interested to know that high strength minoxidil, particularly in cream form, has been seen to produce significant regrowth. This topical hair loss treatment is applied directly to the affected areas of the scalp and the quick application can easily be fitted in to your regular, daily routine. Hair around the temples is the slowest to grow back so results may take at least 4-6 months after starting treatment to become noticeable.

Anyone wanting to know more about male pattern hair loss treatment, whether it is for a receding hairline, a thinning crown or general thinning, should contact a hair loss specialist. They will be able to provide a professional diagnosis, sound hair loss advice and devise a personalised treatment plan based around your specific pattern and stage of shedding, as well as your lifestyle needs.

Does Sam Smith Have A Receding Hairline?

Does Sam Smith Have A Receding Hairline?