Rihanna "Wakes Up" With A Weave, But Does She Know The Risks? 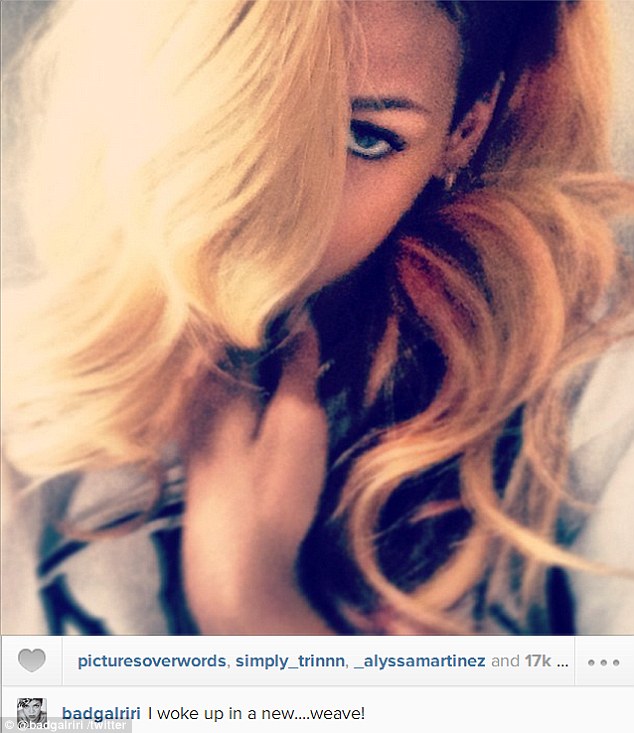 Pop megastar Rihanna is not one to stick at anything for long periods of time, whether it's her clothing style, her partner (her relationship with Chris Brown is perennially off and on) or her hair. Her fans were probably less than shocked, then, when she posted a photo on Twitter and Instagram of her new bouncy blonde locks with the caption "I woke up in a new...weave!"

The Diamonds singer regularly plays around with her hairstyle, from long ombre or red locks to partially shaved styles and short crops, and it appears that this time she fancied a long blonde style with darker strands of hair underneath. However, weaves can do more harm than good to hair, as they put pressure on hair follicles due to their added weight and can cause hair loss.

Even Rihanna's own hairstylist Ursula Stephen has spoken out against weaves, saying that a desire for 'Anglo' styles is pushing women with Afro hair to use damaging relaxers and weaves.

Because weaves can damage hair follicles by putting constant pressure on them, they can eventually cause a condition called traction alopecia, where the damaged follicle begins to produce weaker hairs.

Traction alopecia can cause a vicious circle where hair becomes weak and the weft cannot be attached to that section of hair, meaning that other areas of hair are used in the weaving process and eventually come to be similarly damaged.

The first step to take if you notice your hair thinning is to cease using the hair extensions or weave that is causing the pressure, something that may have previously led Rihanna to wear a cropped style. However, this can often be difficult for those who are used to wearing their hair a certain way. Providing that some hair still grows from the damaged follicles, traction alopecia can be treated.

Weaving Your Way To Treatment

Belgravia treats many patients who are experiencing hair loss from traction alopecia, and have found our extra-strength minoxidil to be a particularly effective means of treating this kind of thinning. Minoxidil is a topical cream that is applied twice a day; it has been licensed by the MHRA and approved by the FDA as a hair loss treatment that can be used by both men and women.

As part of a hair loss treatment plan, minoxidil has grown back the hair of many women (and men) with the condition. Our minoxidil formulations can also contain a number of ingredients that appear to block DHT, the androgen that causes follicles atop the scalp to shrink and produce weaker hair.

A hair loss specialist can identify the minoxidil formulation most suited to your unique case. They can also integrate a number of hair growth boosters into your treatment plan that ensure all round hair health, such as nutritional supplement Hair Vitalics. Regular check-ups at one of our clinics also ensures that progress is closely monitored, and you can enjoy a relaxing clinical treatment therapy session afterwards.