Alopecia is far from uncommon, causing hair loss in more than 1.7 per cent of the population, but as yet there is no cure for this group of autoimmune conditions.

The medical community is very much receptive to new possibilities and results of recent research, particularly in relation to JAK-inhibitor drugs as treatments for different forms of Alopecia Areata, look to be incredibly promising.


Most commonly seen is Alopecia Areata, which is characterised by patchy hair loss. Daily topical applications of high strength minoxidil have been seen to produce encouraging regrowth in Belgravia clients with mild-to-moderate Alopecia. This is thought to be the most effective treatment for Alopecia Areata currently available even though it has only been clinically-proven as a treatment for male and female pattern hair loss.

Less common is Alopecia Totalis, which leads to total hair loss of the head (including the eyebrows, eyelashes and facial hair), and Alopecia Universalis, whereby a person loses all hair on their head and body. While there are treatments for Alopecia Totalis and Universalis, these tend to be less successful.


This round up details the most significant studies into potential alopecia treatments, from the past 12 months.


JAK inhibitor Baricitinib is a cancer medication currently being trialled for a number of conditions including psoriasis and rheumatoid arthritis. Its potential as a treatment for Alopecia Areata was discovered almost by accident when researchers in Israel gave it to a boy for concomitant CANDLE syndrome, who also happened to have Alopecia Areata and saw significant regrowth as a result. Follow-up tests in America (on mice) support baricitinib's long-term potential as a treatment for Alopecia Areata. 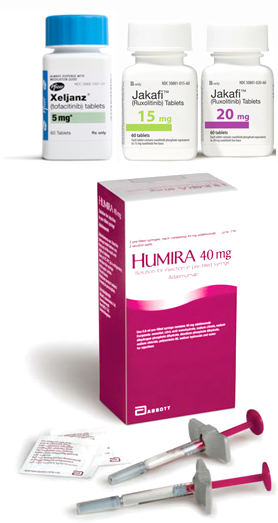 
Developed to treat a life-threatening bone-marrow condition, Ruxolitinib (another JAK inhibitor) has also seen promising results for Alopecia Areata. US researchers tested the drug on three male Alopecia Areata sufferers who were almost completely bald - all three regained a full head of hair within five months. Tests are ongoing to see if Ruxolitinib has a long-term future for treating Alopecia Areata, as the drug's noted side-effects are currently a concern.


Tofacitinib Citrate (brand name of Xeljanz) is an FDA-approved rheumatoid arthritis treatment. Scientists at Yale University's School of Medicine used the drug to treat a young male patient with Alopecia Universalis and the results were little short of miraculous from almost total baldness to a full head of hair in eight months, plus body hair regrowth. This was hailed as the first reported case of a successful, targeted treatment for the condition. While there have been a number of concerns about reported serious side-effects of the JAK-inhibitor when taken for rheumatoid arthritis, the Yale scientists reported that their patient had reported no side effects.


Known as ‘combination therapy’, this treatment combines topical immunotherapy (currently the most common treatment for people with severe forms of alopecia) with a second drug, anthralin (also known as Dithranol) and was tested by doctors in Turkey. In their small-scale study they saw promising results: the combination therapy proved to be approximately twice as effective as the topical immunotherapy on its own. However a number of side-effects were reported.


Used to treat a number of conditions including Crohn’s disease and psoriasis, anti-inflammatory drug adalimumab (brand name, Humira) was recently used in New York on a patient with Alopecia Universalis. Doctors reported impressive regrowth within two months, but also warned that patients and physicians “need to understand both the risks of immunosuppressant therapy as well as the possibility that adalimumab may worsen the alopecia.” Indeed, the drug carries some strong health warnings in relation to its potential side-effects.

While the future possibilities of treatment for Alopecia can seem tantalisingly close, we would advise anyone experiencing patchy hair loss to speak to their GP or a hair loss specialist as soon as possible. Clinical trials which precede the licensing of a new medical product typically take many years, and current treatments may well offer patients the results they are looking for.