Restauranteurs Lisa Vanderpump and her husband Ken are almost as well-known for their love of animals as they are for their roles in top reality TV shows. The English couple, whose LA mansion already houses a brood that includes six dogs, two miniature horses, swans and a potbellied pig, has just added a new member to their furry family: a dog with hair loss. 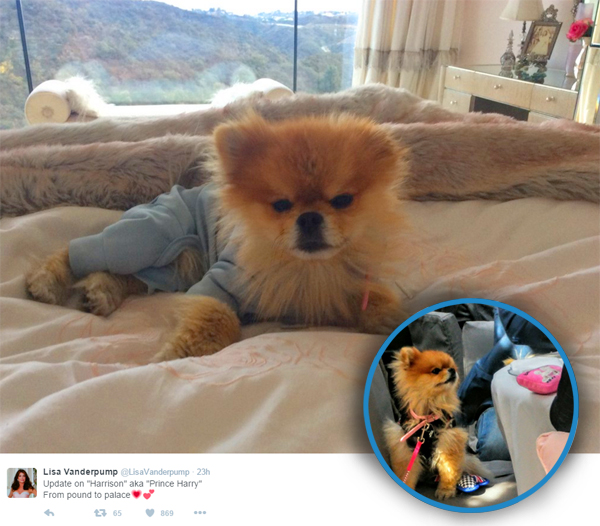 A Sacramento dog shelter reached out to the Real Housewives of Beverly Hills stars via social media, knowing they already have a Pomeranian named Giggy, who also has alopecia areata.

They hoped Lisa could spread the word to her 1.1 million Twitter followers and help to find a loving home for Harrison, a four year old Pomeranian with special needs due to having one ear and alopecia areata on his hind legs and trunk.

Instead, Lisa tweeted back "I will take him".

A few days later, Lisa posted an update to her followers with a picture of the pooch lazing in the lap of his luxurious new home at the couple's Villa Blanca estate, with the caption 'Update on "Harrison" aka "Prince Harry". From pound to palace.' 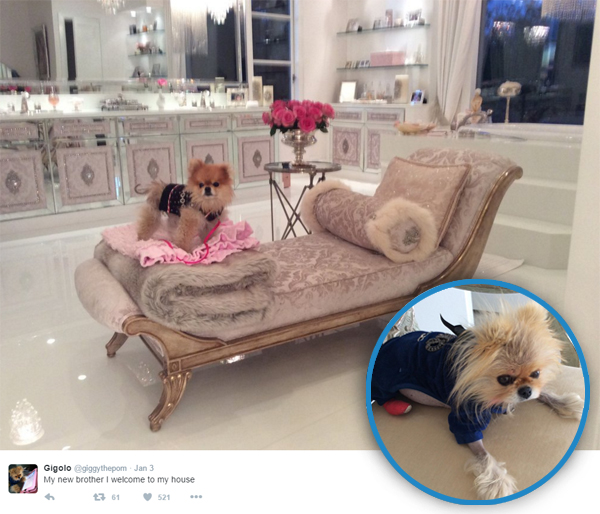 According to the website RealityTea.com, Harrison is now happily settled in and is expected to feature in future episodes of both the Real Housewives of Beverly Hills and Vanderpump Rules.

He has already been spotted out at lunch with Ken and Lisa and big brother Giggy also welcomed him to the family via his own Twitter account (pictured, right with Giggy inset).

At least Giggy will be able to lend Harrison something suitable to wear for his TV debut; the couple has built up an extensive wardrobe of special outfits for their doted-on dog. But these aren't just to fit in with his Hollywood lifestyle, despite Giggy being a charity ambassador for Alopecia Areata in the USA and having starred in a Lady Gaga video.

His clothing is actually designed to protect and keep warm the areas of Giggy's skin which are left exposed by the patches of alopecia. His legs and stomach are particularly badly affected and are left mostly bald.

Alopecia areata in humans and animals

The autoimmune condition alopecia areata can affect animals, from seals to chimpanzees, as well as humans and causes patchy hair loss anywhere on the scalp in humans, or anywhere on the body in animals. It is an incredibly common cause of hair loss and, even just focusing on the number of people - not animals - affected, places it as the second most likely condition behind male and female pattern hair loss.

Although we are unaware of any remedy for animals with hair loss conditions, treatment for alopecia areata can produce incredibly successful regrowth results in human adults. Belgravia generally recommend using high strength minoxidil, which is applied directly to the affected areas, to clients with mild to moderate stage alopecia areata.