Rapunzel' Woman With Alopecia Goes on to Become Hair Model

Good news for people whose hair loss has been caused by the autoimmune disorder Alopecia Areata Russian model Anastasiya Sidorova is living proof that a diagnosis doesn’t automatically mean a life of hair-related woes.

The 23-year-old has been dubbed the “real-life redhead Rapunzel” after appearing in a string of high-profile adverts sporting a magnificent head of red hair which measures more than a metre in length. 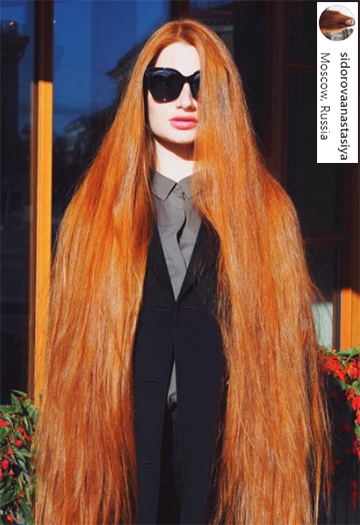 Throughout her teens and until just a few years ago, the young Russian says she was losing her hair in “large bald patches.” Such is the extent of her recovery apparently the result of long-running treatment that was overseen by a trichologist that Ms Sidorova has even modelled for hair care company Pantene in Russia. Via her Instagram account, she also gives hair care advice to her 200,000-plus followers.

In picking up the story, the British media have attributed this hair loss to androgenetic alopecia a permanent, genetic condition which can affect men and women with a predisposition any time following puberty. Due to the duration and pattern of hair loss described, it seems like the media's terminology is most likely to be an error.

The word “alopecia” is used to describe a number of conditions as on its own it technically just means 'hair loss'. However, 'alopecia' has come to mean a specific type of sudden onset hair loss that leaves rounded bald patches behind and is caused by autoimmune disorder, rather than the gradual hair thinning that signifies genetic hair loss.

What sounds more likely is that Ms Sidorova had Alopecia Areata, the autoimmune disorder which leads to patchy hair loss. This comes on suddenly and tends to be temporary.

Media reports suggest the model had been struggling with Androgenetic Alopecia usually known as Female Pattern Hair Loss when it affects women and Male Pattern Baldness when it presents in men. 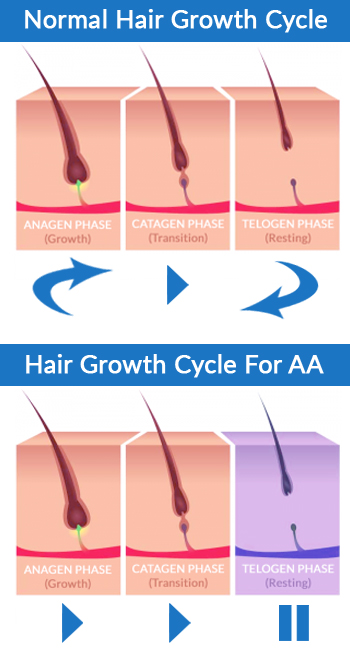 If this were the case her hair would have gradually shed from the top of her scalp and temples only, presenting as thinning hair that caused her parting to look wider and her hair to lose density. Although women affected by genetic hairloss tend to lose their hair later in life than men, technically it is possible for this to start any time following puberty. Whilst losing "large bald patches" to a long-term progressive condition during her teens is not impossible, it is fairly improbable.

As female pattern hair loss is a genetic condition its causes and intricacies are quite well understood. Meanwhile the exact cause of Alopecia Areata is currently unknown; what researchers do know is that there are a number of elements believed to be able to trigger this disorder, which can affect men, women, children and even babies. These include extreme shock, trauma, chronic stress, and possible genetic factors.

Hair falls out quickly when the underlying trigger causes the body’s immune system to turn on itself, shocking the hair growth cycle and leaving various follicles trapped in the resting Telogen phase. Bald spots can be singular or many and can be as small as a £1 coin or far, far larger. The patches may even join up to form larger balding areas.

Recent research has likened alopecia areata to ‘diabetes of the hair follicle‘, whilst links between vitamin D and alopecia areata appear fairly regularly in studies hoping to pinpoint the disorder’s actual cause though there has been no definitive evidence that ingesting more vitamin D reduces the chance of Alopecia Areata-related shedding.

Alopecia Areata can be treated

At Belgravia, hair loss specialists tailor custom courses of Alopecia Areata treatment to each client's specific needs provided they are aged 16 or over. These focus primarily on recommended formulations of high strength minoxidil, paired with additional hair growth boosters to complement the action of this topical medication.

Minoxidil is a vasodilating solution, clinically-proven to treat androgenetic alopecia but also known to be useful in the treatment of other hair loss conditions too. It is applied directly to the areas where it is needed, either once or twice per day as advised. This then opens the potassium channels to stimulate hair growth. Continues below...

Hair regrowth following Alopecia Areata generally takes around six months, depending on its severity. Shorter or longer recovery times have certainly been witnessed among Belgravia clients when it comes to this scalp-only form of autoimmune hairloss.

In cases of the more extreme phenotypes, Alopecia Totalis and Alopecia Universalis, where baldness also affects facial hair and body hair, respectively, there are currently no safe, effective and reliable methods of treatment. This is a key area of research and development at present among pharmaceutical companies who hope to bring the first treatments to market by 2021, assuming they pass the necessary tests needed to gain medical board approval.