British rapper and actress Paigey Cakey, who has performed with Stormzy and starred in the BBC series Waterloo Road, has spoken out about the hair loss that caused her to fly to Turkey to seek out treatment.

The popular 24-year-old explains in a YouTube video how losing her hair to the condition Traction Alopecia became so extreme and distressing for her that she decided to undergo a hair transplant procedure in Istanbul.

Because her hair loss was so advanced, with one side of her scalp appearing almost bald, she opted for a surgery on that side of her head. Like many people, she appears to have been attracted to the idea of a Turkish transplant because prices can be far lower than the £5,000-plus fees which are common in the UK. 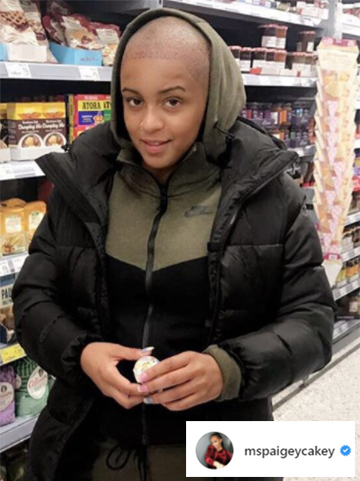 Paigey pictured after her hair transplant


Cakey whose real name is Paige Meade revealed before her trip to Istanbul that her hair had been thinning for two to three years and had become so bad that it had started to affect her on a daily basis. “This was my biggest insecurity and I hid it from a lot of people who were close to me, including family,” she says. “It started as a bald patch and then it started to grow and grow and it’s basically come from tight weaves. I’ve literally just been hiding it. It’s something I think about day in, day out and I hate living with this problem.”

Many people with Traction Alopecia feel a profound sense of anxiety because when left untreated, the condition can often get steadily worse. It happens when hair is regularly styled in a way that places excess stress on the hair follicles, and many popular hairstyles including braids, high ponytails, hair extensions and taut buns, can leave scalps especially vulnerable.

On top of this, subjecting hair to punishing heat-styling regimes can further weaken the hair, as can chemicals, such relaxers which are often used to straighten black hair in particular. Afro hair, like Paigey's, is naturally more brittle than other hair types and can therefore be more prone to breakage.

When Traction Alopecia is not treated swiftly - in mild cases this can simply involve ditching the offending hairstyles or styling practices and wearing the hair naturally for a while in order to let the follicles rest, and in moderate cases additional professional Traction Alopecia treatment may be effective - it is possible for it to cause permanent hair loss.

As Cakey’s thinning edges expanded, she explains that she would try and disguise the bald patches with dabs of mascara. Even when wearing a hat, she says, she would try and conceal the thin hair around her sideburns with eye make-up. “I would buy mascara and cover it over and it would take me a lot longer to do my hair in the morning,” she said. Continues below... 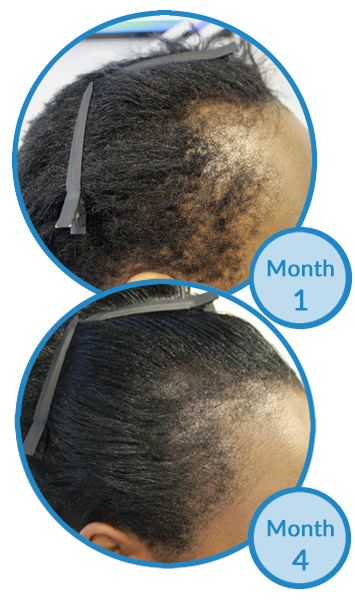 
Hair transplants certainly aren’t the only way to deal with Traction Alopecia, as there is a non-surgical route that can often be very effective as well as being less invasive - and less painful!

Belgravia's comprehensive treatment for Traction Alopecia is tailored to each client's individual needs and makes use of relevant formulations of high strength minoxidil which are available from Belgravia’s in-clinic pharmacies. The minoxidil is applied only to the parts of the scalp where hairloss is evident, and only needs to be used until the desired hair regrowth results are achieved - it does not have to be used on a permanent basis.

In addition to this topical medication, this approach often incorporates several further hair growth boosters. These can include nutritional support in the form of Belgravia's specially-devised premium food supplements for healthy hair growth, Hair Vitalics for Women, to give the hair a boost from within, as well as clinical treatments for clients who visit our Central London and City of London hair loss clinics, and home-use LLT devices to promote regrowth.

While hair transplants can work in some severe cases of Traction Alopecia, they are only really appropriate for extreme, otherwise-permanent hair loss - and, even then, not everyone may be suitable for the op. Suitability depends on a number of factors including how much of the scalp is affected and whether the patient has a good supply of healthy hair in the donor area, which is why this is often decided on a case-by-case basis, especially for women's hair.

This approach also typically requires the patient to agree to shave their hair into a buzz-cut a style Cakey shows off in an Instagram posting just after her operation and it can be difficult to know exactly what you’re signing up for when travelling abroad for surgery. Cakey does say, however, that - unlike some - she was diligent about finding a reputable clinic.

Cakey’s hairloss was certainly advanced enough to need treatment in a YouTube posting just before leaving for Turkey she shows thinning edges on her left side and near-complete balding on her right. Now that she has taken steps to deal with things, she says she feels like she is enjoying a new beginning. “It’s like cheating death and having another chance,” she says.