Prince Harry gave an exclusive TV interview to Sky News this week where he may have revealed more than he intended, by giving flashes of his thinning crown.


As the 30 year-old stood on a balcony on Stewart Island off New Zealand where he is completing his final tour of duty, the daylight highlighted a paler area around his crown. Despite the slightly fuzzy camerawork, there appeared to be signs of progress and potential regrowth compared to previous images of the fifth in line to the throne's troublesome crown area. Continues below. 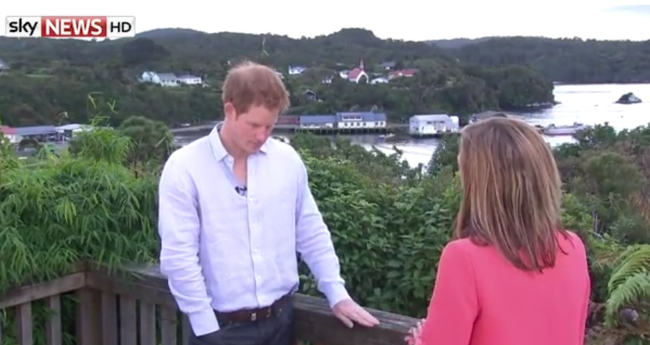 Male Pattern Baldness clearly runs in the Royal Family and, as recent research discovered genetic hair loss is more likely to be inherited from the father's side of the family, Prince Charles' pattern of shedding would certainly explain both Harry and Prince William's thinning.

William is clearly at a far more advanced stage of hair loss than his younger brother, who was rumoured to have been using treatments which may explain the apparent regrowth.

If Harry is using hair loss treatments he may want to pass his advice on to his big brother as it has been reported that Kate, Duchess of Cambridge has urged her husband to deal with his balding, either by getting help or shaving his head. 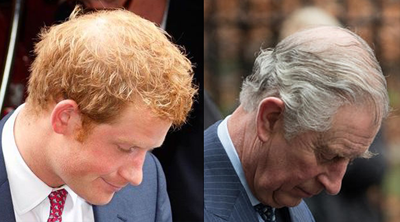 Prince Harry Pictured with a Thinning Crown in 2013 - Was it Passed on By Dad, Prince Charles?


Despite the stresses associated with public life, Harry has always seemed the most laid back member of the Royal Family - something that will serve him well in relation to his hair loss given stress and anxiety can worsen the problem.

The interview with Sky reporter Rhiannon Mills saw the youngest Prince talk about his decision to leave the armed forces after ten years of service in order to seek a more balanced lifestyle.

Prince Harry explained, "It is a crossroads... most of the guys I joined with at the time have already left... but it is a case of if you move on, more responsibilities come and with wanting to take on slightly more of this role [his Royal duties and charity work] I don't really feel as though I would be in the right position..."

"A lot of guys my age, when they get to Captain they leave... there is the next step where you have to move to a desk job... with which comes responsibilities and a lot of your time so if I'm doing this sort of stuff, it doesn't work."

Refusing to reveal what had made his shortlist for future plans other than to say that he wanted to "give something back", Prince Harry felt the best way to do this was to earn a wage and work alongside other people.

As work stress can cause or exacerbate male pattern baldness, whatever Harry chooses to do next, it seems he is aware of the benefits of balance, as well as spending time with others. 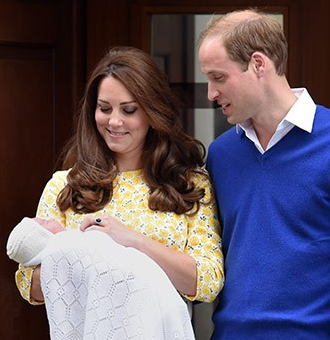 One thing he did open up about his desire to settle down and have someone to "share the pressure with".

Harry also confirmed that his plans include having children, following on from his William and Kate who recently welcomed their second child, Princess Charlotte, although he felt it was not yet the right time just yet.

When he does decide the time is right, Prince Harry would do well to seek professional advice regarding how to manage his hair loss whilst trying for a family.

For instance, whilst topical applications of high strength minoxidil can be used by the man throughout, it is advisable that men who are taking finasteride 1mg stop doing so at least one week prior to their partner trying to conceive.

Whatever the Prince decides to do about his future, and his hair loss, the calm, level-headed approach he displayed during the Sky interview will surely stand him in good stead for making the right choices.