A lawyer from London who suffered a near-fatal reaction to a chemical in her hair dye is calling on the public to demand that it is banned. 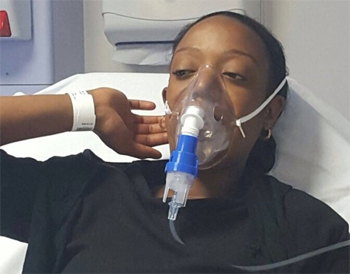 According to the Brent and Kilburn Times, Wembley-based Marina Williamson was “hours away from death” after being hospitalised with breathing difficulties, angry skin hives and a racing heartbeat when she suffered an extreme reaction to a chemical called para-phenylenediamine (PPD), a component in her L’Oréal Garnier Nutrisse home hair dye, and indeed in many other permanent hair-dyes sold in Britain.

She told the newspaper that she had launched the petition to get this “extremely dangerous chemical outlawed” and that she hoped to gather 100,000 signatures to take to Parliament.

The Daily Mail also picked up the story and quoted Ms Williamson, pictured, as saying: “My heart was racing, I could feel my pulse in my neck, my arms and hands. I honestly thought I was dying. The doctor said if I’d waited a moment longer I probably would have had a heart attack.”

Currently a PPD limit of 6 per cent of the total hair dye content is allowed in the UK, but the chemical has been banned completely in Germany, France and Sweden.

Worryingly, the lawyer says that she performed a 24-hour patch test, as recommended to ensure that users are compatible with the product. “It was fine, so I used it on the Friday afternoon because I was going out that evening,” she recalls. By Monday, she says she developed hives and her ears were “bright red and weeping” - as shown in these photos - and it became evident that she was in the midst of a severe allergic reaction believed to have been caused by the hair dye chemical. 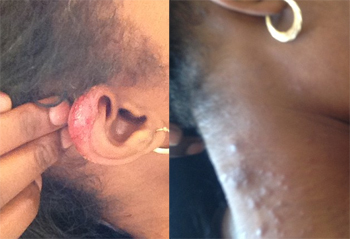 PPD is a widely-used component in permanent hair dyes, especially dark ones, and - despite some controversy - its use continues because extreme allergic reactions are not thought to be common.

Ms Williamson, however, thinks the public should be better informed, and that the warnings on the packaging should be in bold red writing. “I’ve heard from so many women who’ve had bad reactions to hair dye," she told the Mail. "It’s bigger than we think.”

Indeed, this is not the first time this type of claim has been made. Another solicitor, Greg Almond, called for PPD to be banned and also started a petition against the chemical's use in the beauty industry in 2011. He had represented several clients who experienced adverse side effects from PPD in home hair dye kits, one of whom was reportedly paid 'several thousand pounds' by a 'major cosmetics firm' in an out-of-court settlement.

The Guardian reported at the time how Almond stepped up his campaign following the death of 17 year old Tabatha McCourt just 20 minutes after allegedly colouring her hair with a PPD-containing dye, but the government did not implement any restrictions as a result.

A spokeswoman for L’Oréal told the Brent and Kilburn Times: “Allergic reactions to hair colourants are extremely rare.” The spokeswoman also said that the allergy alert test must be completed before each colour application, even if you have previously used the same hair colourant or that of any other brand. “If you have ever experienced any reaction after colouring your hair or any reaction after temporary tattooing with black henna you should not proceed,” she concluded. 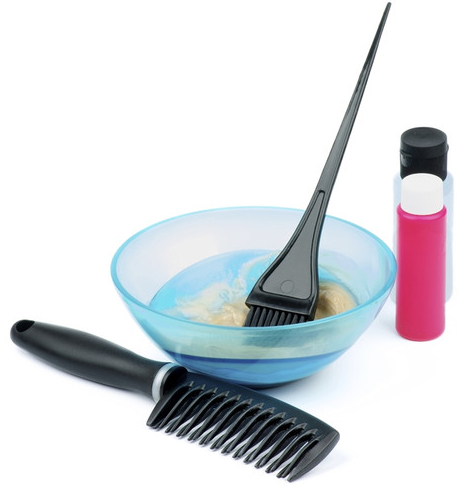 Hair loss and damage from colouring

Hair dyes and hair health are uncomfortable bedfellows and in many ways almost mutually exclusive, yet home hair colouring is on the rise. Even removing extreme reactions such as Ms Williamson’s from the equation, the fact remains that changing the colour of your hair can cause damage and even hair loss.

Severe responses like Ms Williamson's can result in diffuse thinning of the hair from all over the scalp due to a hair loss condition called allergic Telogen Effluvium. This may last up to 12 months and can be treated although the hair should generally grow back naturally.

Although it would be alarmist to suggest that changing your hair colour will likely lead to immediate hair loss in cases where there is no allergic reaction, over-dyeing with colourants or bleach can dry the hair to a damaging extent.

Care should always be taken with both the product and technique to ensure that stress to the hair, follicle and scalp is minimised. Among the problems dyes can cause are skin irritation and weakened dry hair with a general lack of vitality. Harsh treatment can leave it brittle and prone to hair breakage - where the hair snaps along the shaft - which gives the appearance of thinning - something the many women experiencing female pattern hair loss or other hair loss conditions would undoubtedly be keen to avoid.

Importantly, repeated use over many years is likely to be the biggest problem: hair care experts generally agree that the occasional colouring treatment is unlikely to be harmful, particularly if using natural dyes.

Hair Dye and Hair Loss – Are They Linked?

Hair Dye and Hair Loss – Are They Linked?

Pleas For Better Regulation Of Hair Dye Industry After Fatality

Pleas For Better Regulation Of Hair Dye Industry After Fatality