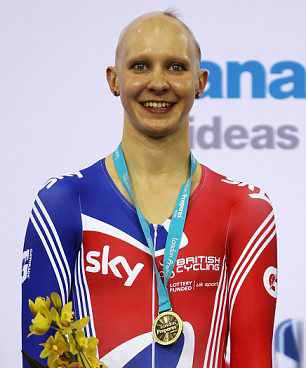 British cyclist Joanna Rowsell became a hero to many people experiencing Alopecia last weekend when she won two gold medals at the UCI World Cup. The 23-year-old twice appeared on the winner’s podium without her trademark wig, and afterwards revealed how her condition spurred her on to success after losing all her hair aged just ten. It wasn’t the first time Joanna had appeared for a post-race photo-call without a wig, but her bravery and obvious delight at winning meant she hit the headlines overnight and was being hailed as a role model for those with the condition.

Like many people with Alopecia, Joanna’s confidence took a knock when she was first diagnosed, but she has since succeeded in living a full and normal life even in the high-pressure world of athletics, and her dedication is paying off. Joanna told The Daily Mail: “The Alopecia made me very shy ... working hard was the only thing that stopped me worrying about the future ... then cycling came along and I applied the same work ethic. I worked through any worries I had about my hair and I focused solely on that. It made me who I am.”

Living life to the full

Despite the shock of hair loss at such a young age, Joanna was motivated to compete in junior competitions and now, with the London 2012 Olympics just around the corner, she credits cycling with boosting her confidence. 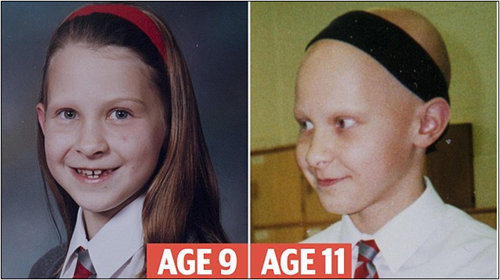 Deterioration: At age 9 with her treasured long hair but one eyebrow missing, by age 11 the alopecia has fully set in

“It was hard being a teenager with Alopecia. I didn’t bother with make-up or clothes because I didn’t want to think about my appearance.” She was scouted by the British cycling talent team when at school aged 15, six years after first dealing with the hair loss that would develop into complete baldness. Joanna first lost the hair in one of her eyebrows before developing bald patches on her scalp and losing eyelashes. “I remember crying one night to my parents and asking what was happening.”

As a result of Joanna’s training and commitment, success has come thick and fast. She won gold in the team pursuit at the World Championships in both 2008 and 2009, and gold in the European Track Championships in 2011. Last weekend’s first UCI World Cup win came as part of the team pursuit trio which set a new record time of 3 minutes, 18.148 seconds. Her second gold medal was in the individual pursuit against former world champion Alison Shanks of New Zealand.

Now, Joanna is philosophical about her condition. She told the Mail: “Much worse things happen in life than losing your hair. I am happy and healthy. Now I want to focus on the things that matter - like getting that gold medal at the Olympics.”

Alopecia Areata occurs when the immune system becomes confused and attacks the body’s hair follicles, causing hair to fall out. Bald patches can eventually spread across the scalp leaving complete baldness but there are different degrees of the condition and mild-to-moderate, patchy Alopecia can be  treatable. The exact cause remains unknown but it is thought to be triggered by stress and trauma.

Hair loss in patches on the scalp or elsewhere on the body generally signifies Alopecia Areata. If left untreated, this condition can develop into Alopecia Totalis like Joanna’s, where the affected area can become completely bald. When the entire body is affected by hair loss, this is known as Alopecia Universalis the kind that TV star Matt Lucas experienced.

Alopecia Areata is surprisingly common it is thought to affect up to 600,000 people in the UK alone, and is often treatable.

The Belgravia Centre and Alopecia treatments

Our hair loss specialists have successfully treated patchy hairloss conditions such as mild to moderate Alopecia Areata and Traction Alopecia, by using treatments such as high strength minoxidil.

To find out more, take a look at some of the success stories with pictures and comments from satisfied clients on our website, or contact us for a consultation by messaging the centre or calling 0800 077 6666. Alternatively fill in our online diagnostic form for a home-use treatment programme that can be sent anywhere in the world.


How did Mel Gibson Restore his Hair?