The inventor of the bagless vacuum cleaner and a New Zealand hair stylist are behind two interesting new styling products that could play a role in reducing hair loss.

Both are gathering column inches at a rapid rate thanks to their new take on existing methods, with much made of the way in which they could reduce damage to the hair that is commonly seen during heat treatment. This comes hot on the heels of a UK market research study which showed how the number of men taking the time to heat-style their hair is on the increase, whilst women were showing more interest in styling tools that could lessen the impact of heat damage to their hair. 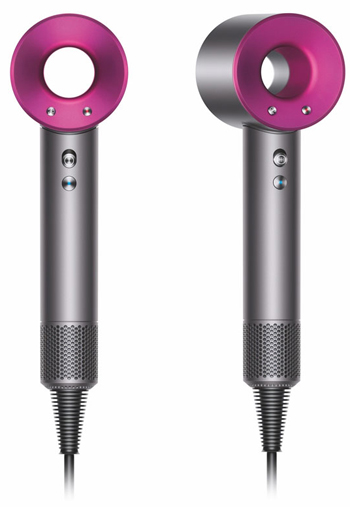 From British inventor Robert Dyson and his team comes a revolutionary new hair dryer that appears to have taken inspiration from the company’s bladeless fans; from New Zealand start-up Roholm is a product named Inverse which swaps heated straightening plates for ice cold ones.

“People can unwittingly damage their hair through their styling methods,” says Leonora Doclis, a senior hair loss specialist at Belgravia. “Although there is a growing awareness of the hair loss condition Traction Alopecia, which is caused by certain tight and, or heavy hairstyles and additions such as extensions, many people seem unaware of the need to also pay attention to the way they use heat on their hair.”

"Many modern heat-styling products - hair straighteners, tongs, even hairdryers - can reach temperatures far in excess of what is healthy for the hair. This can result in dry, brittle hair that looks dull and can snap due to hair breakage which, in turn, makes it look thin and lifeless."

The Dyson hairdryer is called the Supersonic and is markedly different to any dryer before it. As well as being surprisingly quiet the inventors were able to tune the engine note beyond the range of human hearing and into the supersonic range it is also compact. Dyson say it puts users at far less risk of heat damage to their hair because it will never get too hot.

Dyson’s team claim they spent five years studying “the science of hair” before they came up with their new dryer; the company’s design engineer Annmarie Nicolson states that among their findings was clear proof that “when you use any product that goes above 150 degrees Celsius, structural changes start to take place in the hair.” 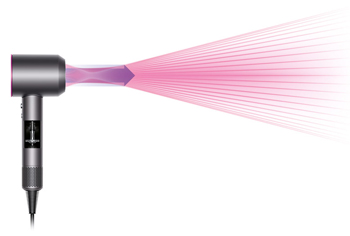 Her colleague Clare Smith, a research scientist, adds that heat can “punch holes in the strands. That will cause light to scatter and the hair will look dull.”

First available from June 2016, the Dyson Supersonic could be a boon to people who style their hair frequently as well offering relief to those who have suffered the effects of too much heat styling, although at a reported £299 it may be beyond the budget of many.

A little more affordable but at around £150 still far from cheap, the Inverse product is not so much a hair straightening device though it does look a lot like one as a conditioning system that its makers state will slowly improve your hair over time.

“The Inverse hair conditioning system treats your hair at sub-zero temperature, locking in moisture and improving strength and elasticity within the hair,” states the company's website. It goes on to explain how, as a result, hair will become “softer, stronger, healthier and more manageable, among many other benefits.” 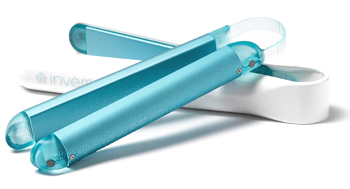 Surprisingly, the device isn’t electrically-powered: the cooling plates have to be put in a freezer for several hours before use.

While it does look like a set of traditional straightening tongs, it definitely doesn’t serve the same purpose client testimony on the company website includes such comments as “My hair holds its curl, is more manageable and less frizzy” and “My under curls look amazing.” The company further states on its FAQ page that “Inverse does not replace your hair styler and will not straighten your hair.”

But is using incredibly low temperatures on the hair just as bad for it as using excessive heat? "Rinsing hair with cool water after shampooing helps to flatten the hair cuticles, hence making it shiny. A cool shot of air helps to lock the curls during styling too, however, using subzero temperatures may even be better - I have not personally tested this device yet but it sounds interesting," advises Leonora.

For anyone concerned that harsh heat-styling or other bad hair habits such as over-processing or frequent bleaching are causing their hair to thin, or if you notice a decrease in the volume of your hair, it is wise to visit a hair loss specialist for professional advice. They will be able to assess your shedding - either in-person or online - then provide you with a diagnosis, support and a personalised plan of hair loss treatments designed to help your hair back to it's optimum potential.