A new skin cancer drug, Sonedigib - brand name Odomzo, has been given clearance by the European Commission  offering hope to thousands of patients across the continent.

As with many powerful drugs, however, Odomzo comes with the risk of side-effects, the most frequent being muscle spasms, musculoskeletal pain and hair loss.

Approved for use in USA and Europe

The Novartis-produced drug is a once-a-day pill that had previously been approved in the US, and is now being used across Europe to treat adult patients with locally advanced basal cell carcinoma (laBCC) who are not amenable to curative surgery or radiation therapy.

According to medical journal Pharma Times, this condition is the most common type of skin cancer.

While hair loss seems insignificant when compared with cancer, it remains one of the most distressing things that many cancer patients say they have to cope with during treatment. Several years ago, Newcastle’s Marie Curie Hospice recognised the severity of the problem by opening a new service for cancer patients in which they could try on scarves, hats and hairpieces in private. Now there are a number of similar hair loss services run by charities throughout England, Scotland and Wales. 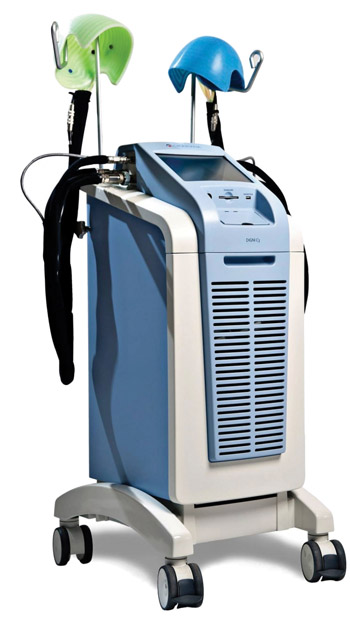 Hair loss as a result of radiation and chemotherapy is common, although it is very rarely permanent. But it couldn’t come at a worse time. When people are at their most vulnerable, frightened and often in a weakened state as a result of their treatment, having to deal with such a dramatic change in their appearance seems grossly unfair.

Fortunately, progress in cancer treatment is being made all the time.

One method of avoiding hair loss in cancer patients is the use of scalp-cooling machines known as ‘cold caps’, which are thought to work by slowing down the blood flow to the scalp during treatment and thus preventing chemotherapy drugs from reaching the hair follicles. Cold caps are unlikely to be of use with the full-spectrum of cancer drugs, however: their real use is in reducing hair loss during chemotherapy, though cancer charity MacMillan point out that cold caps are not effective with all chemotherapy drugs.

Although they also point out that “some doctors have concerns about scalp cooling as it may prevent uncommon cancer cells near the scalp being killed,” this week DigniCap - a brand of cold caps - is close to receiving FDA clearance for their machines (pictured).

While progress is being made in staving off hair loss as a result of cancer treatment, there is obviously a mountain still to climb.