A device which uses low-level laser light as a treatment for hair loss has been involved in a new trial in Taiwan.

Low level laser therapy (LLLT) as a way to address thinning hair caused by androgenetic alopecia in men and women has been around for over a decade with the first home-use device to receive FDA-clearance being the HairMax LaserComb in 2007.

There are now several models on the market which range from the LaserComb, which features a patented action which helps to direct the lights directly to the scalp as opposed to just the hair, to headband, helmet and cap versions. However, all are considered to be hair growth booster products, used as an adjunct to pharmaceutical hair loss treatment courses, rather than being primary treatments in their own right.


The latest LLLT device to undergo testing is the iRestore, a helmet-type device, not dissimilar in appearance to the Theradome, which was trialled by the National Taiwan University Hospital. 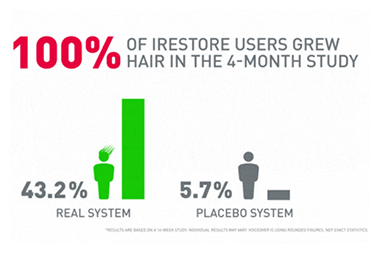 A randomised double-blind study tested the iRestore at several locations across the country. Around 100 people appear to have taken part in the study which actually began back in March 2015; researchers are currently analysing the data gathered during the trial, which closed in December 2016. To help evaluate the device’s efficacy, some of the participants were given a dummy model which was indistinguishable from the real iRestore.

Treatment lasted for 24 weeks and was open to both men and women with genetic hair loss . Unsurprisingly, participants were excluded if they had recently used the hair loss drugs minoxidil or finasteride 1mg, the only two clinically-proven medications which either alone or combined typically form the backbone of genetic hair loss treatment courses, though finasteride is suitable for medically-approved men aged 18 years and over.

Results from this study had not been published on the clinical trial records for this research at the time of writing.

Interestingly, however, the device's website claims that, because all participants using the iRestore noted hair growth during a 16 week trial, it has a 100 per cent success rate. The devices were used by participants for 25 minutes every other day during this time. A side note adds that the figures mentioned are 'rounded' and are 'not the real statistics' underneath a diagram which states that of trial volunteers using the real iRestore device 43.2% 'grew hair', versus 5.7% of the placebo users. So, mathematically at least, these numbers are a little confusing, however, the device has now been cleared by the FDA so there must have been enough merit in the actual findings to warrant this being granted. 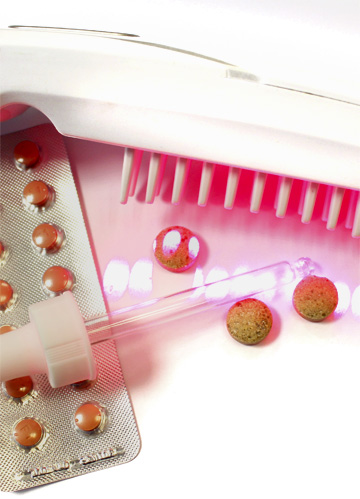 
The company's 2017 marketing material explains: "This past spring, 40 men and women who suffered from genetic hair loss and thinning hair were selected to be a part of the 16-week study for the iRestore conducted by Dr. Adam Bodian, a board-certified dermatologist based in New York. The goal of the third-party-conducted study was to research the effectiveness of our hair growth device in a clinical setting.

In this double-blind experiment, 20 people were randomly selected to be given a real iRestore System while the other 20 were given a placebo system. The placebo systems were specially made for the study. They looked identical to the real iRestore on the outside but were built with normal incandescent lights instead of the clinical-strength lasers and LEDs (at the wavelength of 650 nm) in the real devices."


Men who want to address their receding hairline, or thinning hair caused by male pattern baldness, generally have the option of following a treatment course featuring either or both of the only two MHRA licensed and FDA approved treatments: the once-a-day oral pill finasteride 1mg and/or suitable formulations of the topical drug, minoxidil.

Finasteride 1mg acts to block the dihydrotestosterone (DHT) which causes hair follicle miniaturisation - and  can ultimately lead to baldness in the affected areas around the top of the scalp - in people with genetic hairloss. Directed doses of high strength minoxidil can be applied directly to the scalp where needed, either once or twice per day as instructed. 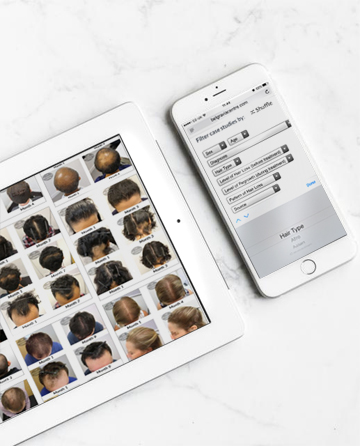 
Supplementary hair growth supporting products can be used in addition to these medications; these include premium hair growth supplements developed exclusively by Belgravia, called Hair Vitalics for Men, and the HairMax LaserComb. The well-established device is FDA-cleared, meaning there was sufficient evidence provided to the American Food and Drug Administration following clinical trials to show that the device effectively helps to prevent hair loss, whilst also meeting the relevant safety and tolerability criteria.

Scientific studies on cell cultures have shown that laser light energy penetrates soft tissue and increases the action of a key molecule that is a major carrier of energy from one reaction site to another in all living cells. These findings mean that using the LaserComb can help to improve and speed up hair growth and revitalise, thicken and strengthen existing hair. The device is seldom used on its own, however, as it is at its most effective for preventing baldness when used as part of a tailored treatment course for eight minutes, three times per week.

A slightly different approach is taken when dealing with women's hair loss. As finasteride is for men-only, female pattern hair loss does not have this option available. Luckily, however, women do not experience the effects of DHT to the same extent as men - this is why the condition is known as female pattern 'hair loss' rather than female pattern baldness. Whilst advanced hair thinning is possible if left untreated, women rarely become bald due to androgenic alopecia. Instead, in addition to increased hair fall, they tend to lose volume and develop thinning hair along the top of the scalp, including the crown and temple areas, which can result in an increasingly wider-looking parting.

To stabilise this type of shedding, topical applications of women's high strength minoxidil - which are, again, applied directly to the scalp either once or twice a day as advised - are used. Again, hair growth supporting products can also be utilised to supplement this approach, including taking the highly-targeted one-a-day Hair Vitalics for Women food supplement. This not only contains a unique blend of high quality vitamins, minerals, amino acids and the soy isoflavones genistein and daidzein, but also feature biotin, zinc and selenium for the maintenance of normal hair growth.

Will You Be Testing the LaserComb for African American Skin Tones?'

Will You Be Testing the LaserComb for African American Skin Tones?'