These are undoubtedly interesting times for anybody whose hair loss has been caused by the autoimmune disorder Alopecia Areata and, in particular, its more severe related conditions; barely a week passes by without another announcement that scientists are nudging ever-nearer to new treatment options which may one day help to regrow hair on even completely bald scalps.

Alopecia Areata treatment can be effective when it is the mild, scalp-only version typically seen as rounded, patchy hair loss. But when people are diagnosed with Alopecia Totalis, all of the hair on their head will be lost. More alarming still, a diagnosis of Alopecia Universalis will result in all body hair shedding, too. Both of these conditions are currently virtually untreatable.

There are several companies around the world who have expressed a commitment to exploring new treatments for extreme alopecia-related hair loss, and one of the most determined appears to be Pennsylvania-based Aclaris Therapeutics. Its work is especially credible because the company has such strong links with Columbia University in New York, where Dr Angela Christiano a global leader in pioneering alopecia treatments has been working tirelessly with her team to try and find the proverbial ‘miracle cure’.

The principal area of interest for Aclaris and Christiano is in the application of janus kinase inhibitor drugs, known as JAK-inhibitors, as potential treatments for extreme autoimmune-related shedding. While these drugs were initially developed to treat such afflictions as rheumatoid arthritis and certain cancers, they have since shown themselves to be effective in certain cases at regrowing hair on scalps that have been bald, in some instances, for many years. 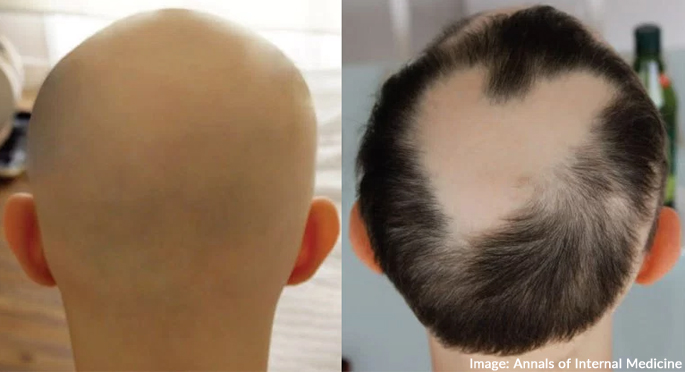 The JAK Inhibitor tofacitinib, which has been patented in the USA and Japan by Aclaris, has shown promise as a potential treatment for alopecia universalis, as per the case study above (click to see more)

Aclaris’ key drug is known as ATI-50001, and up until recently it was being trialled in pill form to be taken orally. Back in January, the company announced a trial to study the pharmacokinetics/pharmacodynamics of the drug to evaluate its safety. While the results of that trial have not yet been made public (it is likely still ongoing), Aclaris is forging ahead with a new study which will look at the safety and pharmacokinetics of a drug they have named ATI-50002 on subjects with Alopecia Universalis and Alopecia Totalis.

ATI-50002 differs from ATI-50001 in that it is applied topically, meaning it is rubbed into the scalp in liquid or foam form. According to the trial announcement on the clinicaltrials.gov website, 12 people will be taking part, some of whom will be given a placebo. The solution will be applied to the scalp twice daily for 28 days in adult subjects only, and data is scheduled to be ready for analysis in March 2018.

Whether the code names ATI-50001 and 50002 refer to any of the suite of JAK inhibitor drugs already patented in the USA and Japan by The Trustees of Columbia University in the City of New York, who have licensed them exclusively to Aclaris Therapeutics, remains to be seen.

There is some hope that new developments in treatment options for extreme alopecia may, if cleared by the relevant governments' medical regulatory authorities, be offered in some form to children. At present, hair loss treatment options for children under 16 years of age with any form of autoimmune alopecia are extremely limited.

From 16 years of age upwards, people with the scalp-only form of Alopecia Areata can as previously stated be treated. This will not prevent the disorder from recurring, which happens in some people, but treatment can be used on an 'as needed' basis and does not need to be on-going in order to retain any hair that is restored.

At Belgravia, tailored alopecia areata treatment courses typically involve the use of high-strength minoxidil from the recommended formulations available at the clinics' in-house pharmacies. The images found, alongside client's reviews, in Belgravia's dedicated Alopecia Areata Treatment Success Stories gallery illustrate just how effective this approach can be.