Natural Hair Colour Genes May Play A Role In Diseases

For some of us, our natural hair colour is a distant memory, but scientists have discovered that this visual trait may have wide-reaching health implications.

Just as hair loss caused by premature male pattern baldness has been identified as a potential indicator of a number of men's health issues, it appears the genetics involved in determining a person's hair colour go far deeper. 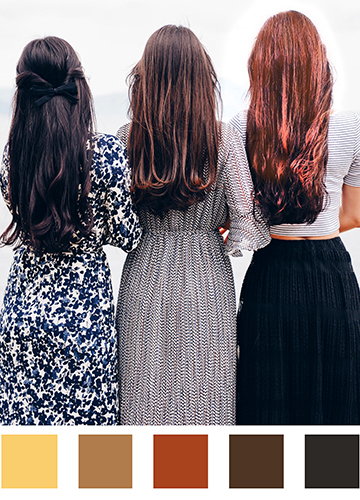 
A large-scale international research project studied DNA from almost 300,000 people of European descent to explore humans' melanin pigment metabolism. Only European candidates were included in order to avoid what the documentation refers to as 'population structure'.

Melanin is the natural pigment, known as a 'biochrome' and produced by melanocyte cells, which dictates human pigmentation. The colouration depends on factors including the quantity, ratio, and distribution of the main melanin pigments, eumelanin and pheomelanin. From skin to hair colour, essentially what this means is the more melanin that is present, the darker the shade.

In relation to the dictation of hair colour, researchers explained: 'Twin studies suggest that up to 97% of variation in hair color may be explained by heritable factors, and genome-wide association studies have identified several chromosomal regions associated with hair color and related pigmentation traits. Except for red hair, known variants have a relatively low predictive value, and the heritability gap remains relatively large, which suggests that many hair color genes remain undiscovered.'

Data for this large study was taken from the UK BioBank (133,238 participants) and the American personal genetics service 23andMe (157,653 participants) - and what it showed was ground-breaking.

Scientists from respected institutions around the world, including King's College London, the University of Edinburgh, the University of Trieste in Italy and Erasmus MC University in Rottterdam, The Netherlands, authored a paper explaining their findings. This was published in the Nature Genetics Journal.

Whereas previously only 13 genes were known to be involved in establishing hair colour, this study discovered 124 contributing genes. These were mostly found to work by affecting either the production or the distribution of melanin.

It was also established that genetic inheritance could explain the complex phenotypes of hair colour to varying degrees. These were 34.6% for red hair, 24.8% for blonde hair, and 26.1% for black hair. Furthermore, it discovered a strong association between self-reported natural hair colour during adulthood and sex. The European women studied were more likely to have blonde or red hair than any other colour, and were between three and five times less likely to have black hair than the male participants.


Speaking to The Guardian, one of the paper's lead authors, Tim Spector of King's College London, explained: "Pigments are far more than just cosmetic they are important for the immune system and play a role in many diseases. Understanding the genetics could lead to new therapies.” 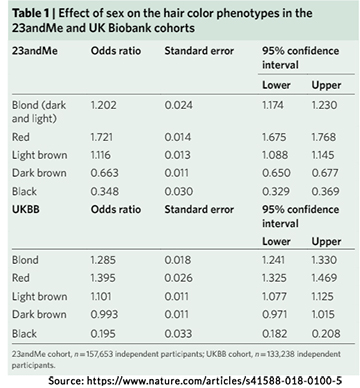 Whilst media reports have focused on the forensic, criminal applications of these findings - Spector advises, "If someone leaves blood at a crime scene, you could say from their DNA whether they had black or red hair with about 90% certainty" - there are key health issues this new information may help, including skin cancer and autoimmune diseases - such as Alopecia Areata.

Whether this could potentially include new Alopecia Areata treatments, perhaps for its more extreme and currently clinically untreatable forms - Alopecia Totalis and Alopecia Universalis - all of which are considered autoimmune disorders and lead to varying degrees of hairloss - is unconfirmed. Currently the scalp-only phenotype has treatment options for those aged 16 years and over.

It is already understood that early humans had dark skin which protected against high ultraviolet radiation - a cause of skin cancer and folate deficiency - whilst people from Europe and Asia evolved lighter skin as they migrated to areas with lower UV radiation. Light skin pigmentation allows for maximum absorption of ultraviolet radiation in order to promote vitamin D intake. Interestingly, this is something which has been linked to autoimmune alopecia hair loss in a number of clinical studies and - thanks to this research - may be worth exploring further.

"This research is definitely food for thought," said Belgravia senior hair loss specialist Leonora Doclis. "What would be extremely interesting, given this new information and the numerous past studies associating vitamin D levels with alopecia areata, would be to find out whether there is a link between melanin levels and autoimmune alopecia - is it more common in people with paler skin? Or in certain countries or locations where people are less likely to be exposed to sunlight?

We know that there are a number of triggers associated with Alopecia Areata, including sudden shock and allergies, but there has always been the suspicion of a genetic element. Whether or not this may relate to skin pigmentation would certainly be interesting to explore, not least because despite its prevalence, there is still relatively little known about the bio-mechanics of this kind of alopecia and the more information there is, the more chance of developing treatments for those phenotypes whose needs are currently unmet.

It also bears noting that this type of research takes a long time and any resulting treatments would take additional development and testing time. So anyone experiencing unusual levels of shedding or sudden hair loss now would be best served getting a professional diagnosis as soon as possible and - where appropriate - investigating currently available hair loss treatment methods. I recall when scientists believed they had found the exact genetic elements involved in Male and Female Pattern Baldness, and decided to invent a spray-on gene-therapy solution to prevent hairloss only to find there were many, many more genes associated with the condition than they initially thought - and possibly some which still remain undetected."