Fans of the X-Men series of films will doubtless have been preoccupied by plot details more pressing than what caused Professor X’s hair loss, but it has nonetheless been something of a burning question ever since James McAvoy played a young Professor X with a full head of hair.

Veteran British actor Patrick Stewart first brought life to the role in a series of X-Men films between 2000 and 2006, famously playing the telepathic mutant with a bald head. Stewart, incidentally, told chat show host Michael Parkinson that he lost all of his hair within the space of a year when he was 19. Though he doesn’t specify the exact cause, Male Pattern Baldness seems likely given that the actor still has hair at the sides of his head when he lets it grow. 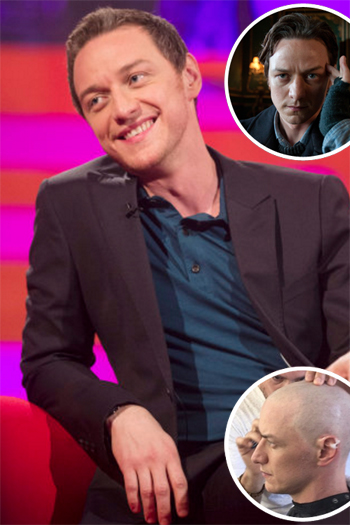 A surprise to fans

A generation of X-Men fans were surprised to see the younger Scottish actor play Professor X (aka Charles Xavier) with hair when Marvel decided to make a series of prequels to the Stewart-era movies. Now, with X-Men: Apocalypse, the third installment of these prequels in the can and ready for a 2016 release, it looks like all is set to be revealed after James McAvoy was pictured on-set with a shaved head.

Actors are famously tight-lipped when it comes to the plot of new movies, but McAvoy seems to have been unusually forthcoming when he turned up on the Graham Norton Show last week.

“He ends up going through something so horrible and physically painful that he literally pulls his hair out, half of it falls out,” said McAvoy before swiftly adding “Maybe, or maybe not!” as the realisation sunk in that he might be landing himself in hot water with Fox Studios “who own me”.

What looks likely, then, is there are two reasons behind the character’s dramatic hair loss, and they are probably related. One possibility is that the professor suffers an horrific injury to his head due to fire or radiation; this could easily lead to Cicatricial Alopecia, which is also known as Scarring Alopecia.

It is the name given to a group of conditions that arise as a result of inflammation of the scalp often caused by injury which destroy the hair follicles and replace them with scar tissue. As a result hair can no longer grow. At present, there is no effective treatment for the condition in most cases although researchers are currently investigating potential treatment options.

Pulling out own hair

The loss of Professor X’s hair in this way would undoubtedly be traumatic and could easily give rise to the second half of the equation, as revealed by McAvoy the pulling out of his own hair.

The medical name for an obsession with pulling out your hair is Trichotillomania, and it is not as uncommon a condition as you might think. People with Trichotillomania twist, pull and tug at their hair repeatedly, often creating bald patches or a general all-over diffuse thinning from hair breakage.

Depending on how severe the damage, the actual hair loss caused by this condition can sometimes be treated with minoxidil if the hair follicles are still functional.

Psychiatrists regard Trichotillomania as a psychological disorder, however, so therapy is also advised to help those affected to get to the root of the problem and become 'pull free'.

The “Meaning” of Baldness: Hair Loss in Works of Fiction

The “Meaning” of Baldness: Hair Loss in Works of Fiction