Mums are known to go the extra mile for their children, but for most parents it’s things like playing taxi driver or buying tickets to see a pop band that helps them win brownie points.

For A-level student Lauren Green, however, the best thing her mum could give her was her hair. 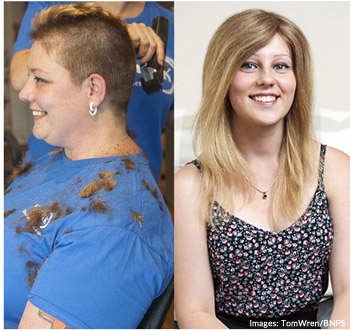 Since the age of eight, Lauren has endured total hair loss on her head. Her condition most likely Alopecia Totalis struck overnight, and in just three days all of her long blonde hair had fallen out, followed by her eyebrows and eyelashes.

Thus began a difficult and thoroughly unexpected journey which involved ill-fitting wigs, cruel taunts at school and also missing out on some of the enjoyment that normally comes with being a teenage girl.

Though Lauren did once receive a specially-made wig from acclaimed children’s charity, Little Princess Trust, several years' of wear and tear meant that she was in dire need of a new one.

Mum to the rescue

Luckily for Lauren, her big-hearted mum Jo was only too happy to come to her aid. Talking to The Daily Mail, Jo, 41, explained how she hit on the idea of growing her own normally short hair long so that it could be cut off to make a bespoke wig for her daughter - raising money for Alopecia UK in the process. The icing on the cake were blonde highlights, so that Lauren could get the exact look she wanted.

It took Jo an incredible three years to grow her hair to the required length, but it seems to have been worth the wait. Lauren told the Mail: “It feels like it’s my own head of hair. It feels natural and it is a lot more sentimental because it is my mum’s old hair although it is a bit freaky that I now look like her.”

It’s been a rough ride for Lauren, who lost all her hair just days before returning to junior school after the holidays. A succession of mostly poorly-fitting wigs followed, as did an assortment of cruel remarks from classmates at secondary school. Luckily, a change of school did the trick, and Lauren found new friends. The typical teenage chit-chat about hair, however, always made her feel left out. “One thing I really miss is washing my hair and being able to run my fingers through it," she told the Mail. "Most people think it’s a chore to wash their hair, but I would love it.” 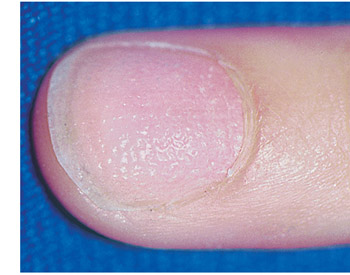 Unlike the rather more common Alopecia Areata, which is characterised by patchy hair loss and affects the scalp only, Alopecia Totalis results in total hair loss across the scalp and can also cause all facial hair - including eyebrows and eyelashes - to fall out. It is an autoimmune disorder and sometimes affects nails as well, causing them to become brittle and warped - such as the example pictured which shows how the nail has become 'pitted' due to Alopecia Areata.

Although it is not physically painful, the psychological effects of this highly visual condition can be profound. While children with alopecia are often described as being made of sturdy stuff and able to “just get on with it”, there is little doubt that they are sometimes marginalised at school and made to feel different. Sadly, there is no known cure for the more extreme types of alopecia areata and treatments for alopecia totalis and universalis, most notably Topical Immunotherapy, have fairly unimpressive response rates, but there are UK hair loss charities who can offer specialist support.

If your child's hair does suddenly start falling out, a visit to a GP or specialist hair loss clinic is highly recommended. Although Belgravia offers treatment for Alopecia Areata, it is only suitable for clients who are aged 16 and over.